A place for poems, songs, rhymes, and traditions from around the world for both kids and grown-ups to enjoy!
Advertisement
Can Anyone Help with a Tamil Game Song called Oru kodam thanni?
February 29th, 2020 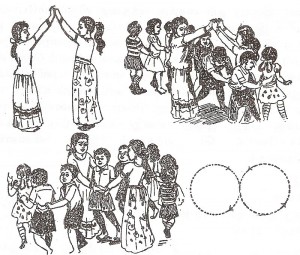 We came across a Tamil game called “Oru kodam thanni” while collecting singing gamesÂ similar to “London Bridge is Falling Down”. In this type of game, two kids stand opposite each other andÂ make an arch with both hands up in the air. The rest of the group forms a line and goes under the arch. Whoever is under the arch at the end of the song gets caught by the two kids making the arch.

It’s a counting song so each verse/line goes up a number until you get to ten. Here’s the first line of the song:

After pouring one bucket of water, one flower flowered.

If anyone can help with providing the rest of the text that counts up to ten, please email me. We’d also love to learn about the game that takes place once the child is captured. Thanks in advance for any help! -Mama Lisa

This article was posted on Saturday, February 29th, 2020 at 5:07 pm and is filed under Countries & Cultures, Games Around the World, India, Languages, Mama Lisa, Questions, Readers Questions, Singing Games, Tamil. You can follow any responses to this entry through the RSS 2.0 feed. You can leave a response, or trackback from your own site.

2 Responses to “Can Anyone Help with a Tamil Game Song called Oru kodam thanni?”