A place for poems, songs, rhymes, and traditions from around the world for both kids and grown-ups to enjoy!
Advertisement
Cameroonian, Nigerian & West African Attire for Weddings & Special Events
March 15th, 2021

I recently interviewedÂ Nyango M. Nambangi of the Minnesota African Women’s Association about Women’s Day in Cameroon. One important aspect of the holiday is the attire. The clothing is related toÂ garments for other important events such as weddings and funerals. So here we’ll discuss the attire in Cameroon for important events in general and then we’ll cover Women’s Day in another post. 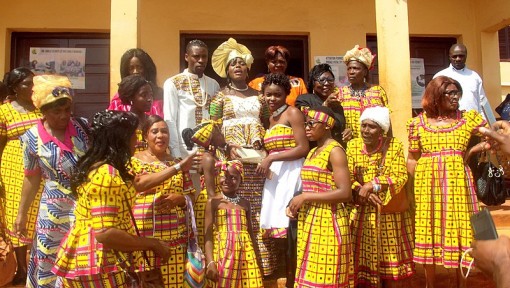 At weddings in Cameroon, Nigeria and other parts of West Africa, everyone in the same family will wear clothes made with the same fabric to show a close connection. So the bride’s family will be in one fabric design and the groom’s family will be in another fabric. Co-workers might be in a different fabric design and friends could be in yet another. So when you go to a wedding in Cameroon you may see people wearing 5 different patterns of fabric.

The word for this tradition comes from the Yoruba language and is called Aso-ebi. Aso means cloth and ebi means family. In Cameroon it’s also called ashwabi.

According to Wikipedia, “Aso ebi sometimes spelt as Asoebi is a uniform dress that is traditionally worn in Nigeria and some West African cultures as an indicator of cooperation and solidarity during ceremonies and festive periods. The purpose of wearing the dress can be to serve as self-identification with age mates, relatives or friends during social occasions or funerals. Affordability of fabrics such as Ankara has contributed to the popularity of uniform dressing for social occasions in Nigeria.”

Ankara is also calledÂ DutchÂ wax or Holland wax fabric. It’s a common material used for clothing in West Africa. The fabric is industrially made cotton and is usually in a batik like print. (See explanation of batik below.) 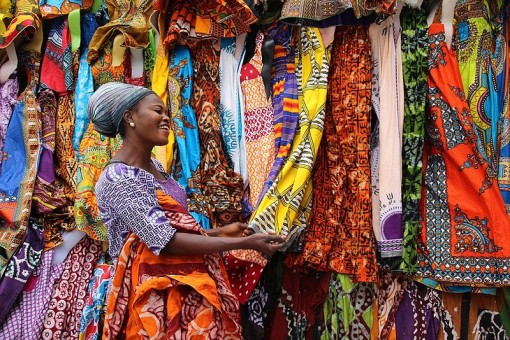 “Wax prints are a type of nonverbal communication among African women, and thereby carry their messages out into the world. Some wax prints are named after personalities, cities, buildings, sayings, or occasions.” –Wikipedia

The fabric is called Dutch wax because the Dutch first pickedÂ up theÂ idea of making batik patternsÂ in Indonesia. Batik patterns are made using wax-resist techniques. Melted wax is used to cover part of the blank material to form a pattern. Then when it’s soaked in dyeÂ the parts with wax aren’t dyed. The process can be repeated using different colors. This is how differentÂ patterns are made using the batik method. The Dutch wanted to mass produce batik cloth to sell in Indonesia in the 1800’s but their business never took off there. When they brought the “wax” fabric to West Africa it became very popular. Nowadays, Nyango said, “The fabric is inspired by African art and meant to appeal to Africans. It doesn’tÂ necessarily have any symbolism. It’s also called ‘wrappa’.”

Nyango said, “‘Uniform fabric’ is worn by groups during holidays like Labor Day to identify different unions or businesses, etc. On such occasions, we refer to the cloth as uniforms. For example,Â people from one company, union or governmental department will all wear clothes using the same fabric.Â (You can see this in the photo from a parade below.) 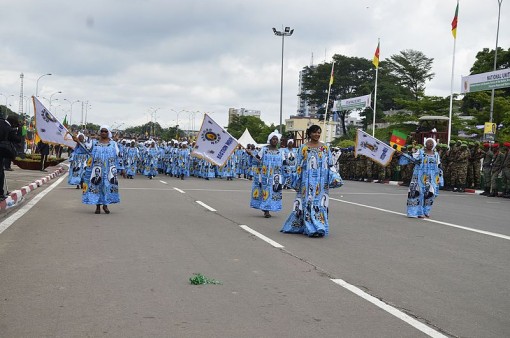 Ashwabis are more special as they denote closeness of members of a group – like family, friends and also denote the kind of occasion it is – wedding, funeral.”

Generally women will use the fabric to have dresses made or long skirts worn with a blouse. There are different styles worn. The most traditional is called two wrapp-a (2 wrappers) in which a “double” skirt is worn with a shirt. One skirt is long and goes down to the floor. Then a piece of cloth is worn over itÂ which goes down to the knees. (See photo below.) These can be a little hard to walk quickly in! This style has traditionally been considered respectable dressing for married women. Though nowadays it’s less common for women to wear the style on a daily basis than it was in the past.

The fabric can also be made into a dress called a kaba.Â The kaba is very distinct – it has a cut along the bust line and is gathered at that point. Some are long and some are short. It is the style that makes it a kaba. 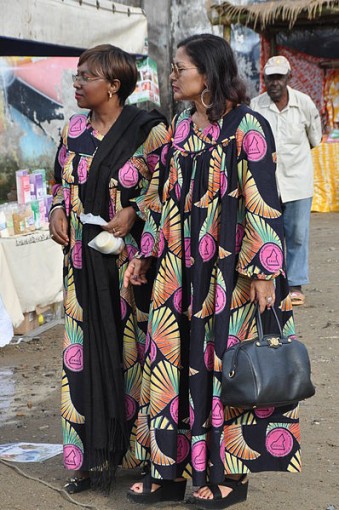 You can see Nyango in a kaftan-style dress in the photo below. Nyango said, “It’s one of the styles Cameroonian women now prefer to wear with the wrappa/Ankara fabrics, instead of the 2-wrappas. Other popular variations include making a long skirt and a top, and caftans/kaftans from Ankara / wrappa/ dutch wax/ African Print fabric.” 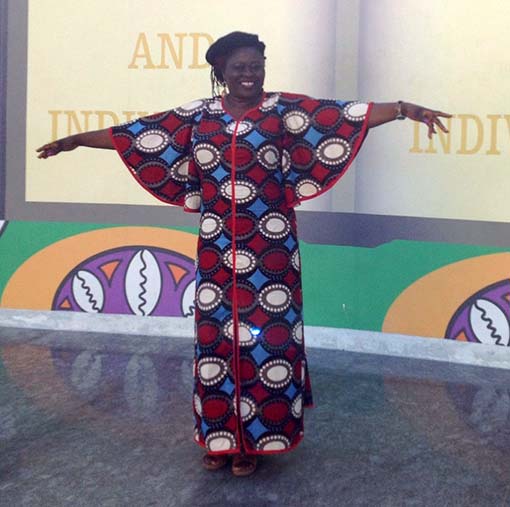 The attire men wear with the fabric varies depending on the occasion. For weddings, men will wearÂ a type of robe called an agbada. Nyango said, “the agbada is also called a boubou or bubu in Cameroon and other West African countries.”Â It’s worn with pants. 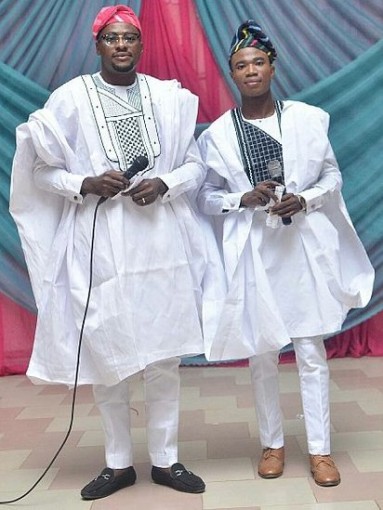 For parades, when using the “uniform” fabric men will often wear what’s called a jumper. It’s a long shirt that goes below the derriere and is often worn with solid colored pants.

Many thanks to Nyango M. Nambangi for sharing these traditions with us! Nyango works withÂ Â Minnesota African Women’s Association, a non-profit organization whose mission is toÂ promote the health and wellbeing of African refugee and immigrant women, girls and their families in the Twin City area. You can find MAWA on Facebook here.

Thanks also to Nyango’s sister Inez Belie Nambangi for sharing her photo with us!

Check out our Cameroonian Song Pages where Nyango has shared many songs from Cameroon with us (including many recordings she made of them!)

Image 3:Â Ms. Denise Fampou, mayor of the commune of Douala 2e during the parade of May 20, 2016 on the occasion of Cameroon’s National Day, Wikipedia, cc 4.0

Image 5:Â In Kaba Ngondo during a ceremony, Wikipedia, cc 4.0

This article was posted on Monday, March 15th, 2021 at 9:55 pm and is filed under African Customs, Cameroon, Cameroonian Pidgin English, Countries & Cultures, Customs and Traditions, Funeral Traditions, Languages, Mama Lisa, Nigeria, Wedding Attire around the World, Wedding Traditions, Weddings, Yoruba. You can follow any responses to this entry through the RSS 2.0 feed. You can skip to the end and leave a response. Pinging is currently not allowed.