A place for poems, songs, rhymes, and traditions from around the world for both kids and grown-ups to enjoy!
Advertisement
Calaveras – Skull Poems & The Danse Macabre
January 26th, 2011

Calaveras literally means "skulls". Calaveras are poems recited for the Day of the Dead (All Souls Day) in Mexico.  They’re satirical poems that poke fun at people in a way that suggests they’re dead, even though they’re alive.  Often the people being satirized are politicians and other people in power or in the public eye.  It’s a way to make fun of the rich and powerful in a safe, accepted way.  Also, to point out that we all end up in the same place in the end.

Sometimes these satires are found in the form of illustrations like the one below.

The tradition of these types of satirical poems dates back over 500 years.  They could be found in Spain and other parts of Europe.  They were often part of the "Dance of Death" (called the "Danse Macabre" in French and "Danza Macabra" in Spanish and Italian).   The Dance of Death was a type of play performed in the 14th century.

The Dance of Death was also meant to remind people that everyone’s mortal.  No matter what your station in life everyone faces the same fate.  Given the frequent famines and plagues in Europe, people needed satire to help deal with the grim world around them.  Poems, plays and paintings helped give people an outlet. 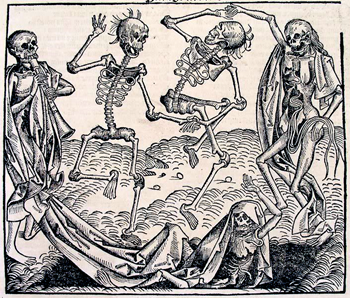 The Dance of Death by Michael Wolgemut (1493)

Nowadays in Mexico ordinary people also write Calaveras for each other.  Some even print them in the classified section of the papers around the Day of the Dead.  They point out the shortcomings of people, but are meant to be taken in the spirit of fun.

Below you can read a calavera in Spanish with a loose English translation. It’s from here. It’s making fun of a Bullfighter:

Here lies a good bullfighter,
Who died of grief
From being a bad banderillero*,
Booed at each performance;
He has died of a tumble
Received on the rear
And such was his foolishness
That he was already in the tomb,
Turned into skull and bones**
And fighting the dead.

*Banderillero: A bullfight itself has stages. The Banderillero is the guy who plants the banderillas (flags) above the bull’s shoulders during a bull fight (see photo). There’s no translation for it in English. You can be a good bullfighter but a bad banderillero.

**In other words, he was already dead. “Calavera” normally means “skull”. But sometimes, when you say someone has become a “calavera”, it means this person has become only bones.

Translated by Lisa and Monique

Calaveras can also be poems talking about death in general and skulls and skeletons.

I hope you enjoyed learning about Calaveras, whether you’re alive or dead!

Additional Reading: Calaveras mexicanas in Spanish only
Calaveras and Posadas

This article was posted on Wednesday, January 26th, 2011 at 8:45 pm and is filed under Arts and Crafts, Calaveras, Countries & Cultures, Customs and Traditions, Danse Macabre, France, French, Hispanic Traditions, Holiday Poems, Holidays Around the World, Illustrations, Italian, Italy, Mexico, Poems, Poetry, Souls Day, Spain, Spanish, Spanish Poems, The Day of the Dead, The Day of the Dead Poems. You can follow any responses to this entry through the RSS 2.0 feed. You can skip to the end and leave a response. Pinging is currently not allowed.