A place for poems, songs, rhymes, and traditions from around the world for both kids and grown-ups to enjoy!
Advertisement
Brazilian Tale of The Girl and the Fig Tree
June 24th, 2010

The Tale of The Girl and The Fig Tree is an old Brazilian tale called A menina e Figueira, in Portuguese. There’s a popular Brazilian kids song that comes from this story called XÃ´, passarinho (Shoo Little Bird). Here you can read the tale in English… 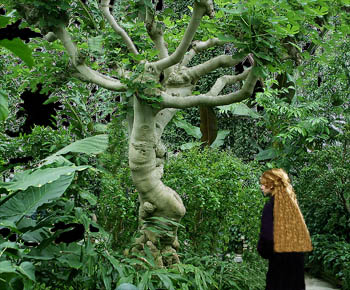 Tale of The Girl and The Fig Tree

Once upon a time there lived a widower with a very pretty daughter.

A young woman who wanted to marry the girl’s father lived in the neighborhood. To that end, she treated the girl so nicely that the girl went to her father and said:

“Father, why don’t you marry our neighbor? She’s so good to me? Every day when I visit her she gives me bread and honey.”

“Daughter, when I marry her, she’ll give you bread and bile.”

But she wouldn’t believe it and the young woman showed the girl so much kindness that the father ended up marrying her.

After the wedding, the step-mother started to mistreat the girl, punishing her for every tiny, little thing.

The father had a huge fig tree in his garden. The girl had to watch it all day long to make sure that the little birdies wouldn’t eat the figs. When they did, the step-mother would beat the girl without mercy. 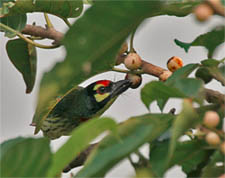 One day when the husband was off traveling the birds ate the figs. So the step-mother buried the girl in a patch of grass in the garden.

The next day the husband came home and asked about his daughter. The step-mother said she disappeared.

Later, the gardener went to cut down some grass to feed to the horse. As he cut the grass with his scythe, he heard a sad song, and he listened…

O, father’s gardener,
Do not cut my hair,
My mother combed it.
My step-mother buried me,
Because the birdie pecked at the figs on the tree.
Shoo birdie from my father’s fig tree.

Then the gardener went to tell his master what he had heard. The master went to the patch of grass, he ordered the gardener to pass the scythe through the grass and they heard the song again.

Recognizing his daughter’s voice, he ordered the gardener to dig up the ground. He found the girl alive and took her home. He threw the step-mother out of his house and never wanted to hear mention of her again. He stayed alone with his daughter for the rest of his days.

“The Girl and the Fig Tree” tale is also known as “The Step-Mother” and “The Girl Buried Alive”.

This article was posted on Thursday, June 24th, 2010 at 12:45 pm and is filed under Brazil, Children's Songs, Countries & Cultures, English, Languages, Mama Lisa, Portuguese, Portuguese Children's Songs. You can follow any responses to this entry through the RSS 2.0 feed. You can skip to the end and leave a response. Pinging is currently not allowed.