A place for poems, songs, rhymes, and traditions from around the world for both kids and grown-ups to enjoy!
Advertisement
Alouette: What It Means (It’s not as nasty as you’d think!)
October 12th, 2010

Alouette is NOT a Mean Song… REALLY!

Most people think the French Canadian song, “Alouette” is very mean, once they learn what it means in English. It sounds like it’s about someone taunting a bird… “Lark, nice lark… I’ll pluck out your feathers… I’ll pluck your eyes.. I’ll pluck your wings…” It sounds really cruel. 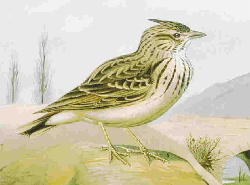 I asked Monique Palomares in France about it. She wrote back, “‘Alouette, gentille alouette’ is not a song about mean people who want to cruelly pluck a lark alive. Larks were and are considered as game, so people would FIRST kill them, then pluck them, then cook them and at last eat them.”

We don’t eat larks in the US, so most Americans at least, think the song is mean. Now we see it’s really not! It’s as if we bought a chicken or a turkey from a farm and had to pluck the feathers out ourselves. While doing the chore we might have sung a song like “Alouette”… at least in the olden days we may have.

Here are the lyrics to the song in French with an English translation. Consider them with that in mind…

Which translates literally as:

Good morning, William, did you have a good breakfast?
Oh, yes, madam, I had some pÃ¢tÃ©,
Lark pÃ¢tÃ©, William and Wilma
Everyone hugs one another
William will stay.

You can hear Bonjour Guillaume on Mama Lisa’s World France page. There you’ll also find the instructions for this circle game.

I found reference to eating lark in an old American cook book! Yet we have no memory of cooking or eating larks! So it must have been a long time ago.

Thanks to Monique for explaining about the meaning of the song “Alouette”.

NOTE from October 2010: I’ve been reading Gulliver’s Travels by the Irish writer Jonathan Swift (published in 1726). There’s mention in the book of eating larks. Larks seem to have been eaten in the United Kingdom and Ireland in the past too.

This article was posted on Tuesday, October 12th, 2010 at 4:16 pm and is filed under Alouette, Canada, Canadian Children's Songs, Children's Songs, Countries & Cultures, English, France, French, French Kids Songs, Languages, Mama Lisa, United Kingdom, USA. You can follow any responses to this entry through the RSS 2.0 feed. You can skip to the end and leave a response. Pinging is currently not allowed.

89 Responses to “Alouette: What It Means (It’s not as nasty as you’d think!)”