A place for poems, songs, rhymes, and traditions from around the world for both kids and grown-ups to enjoy!
Advertisement
Alice in Wonderland the Movie and Book
February 19th, 2010 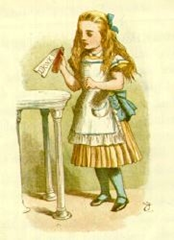 Alice in Wonderland is coming out in theaters next month in the US… starring one of my favorite actors, Johnny Depp!   Adding to the excitement is that it’s directed by Tim Burton.  He directed Edward Scissorhands (starring Depp), The Nightmare Before Christmas, Corpse Bride, James and the Giant Peach, Charlie and the Chocolate Factory (also starring Depp), and the list of great movies by Burton goes on! 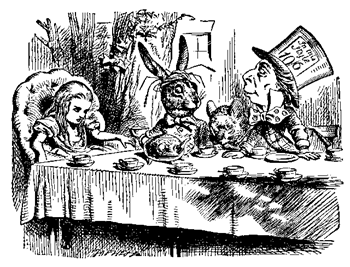 We’re hoping to re-read the book before watching the movie and introducing these wonderful characters to my daughter before the big event.

Here are some online sources for reading the book, and listening to it read aloud…

Alice in Wonderland – different versions at Project Gutenberg – you can download them or read them online.  The mp3 recordings are the ones with the speaker symbol next to them.

Illustrators of Alice on the Web – Choose the ones with "text" to read the book online or look at different illustrations.

The Original Alice -Written and illustrated by Lewis Carroll – (Requires a Flash Player) – A version where you flip the book on your computer screen and you can hear it read aloud.

LibriVox Recordings of Alice in Wonderland (The recordings below are clips from here so you can get an idea of how they sound.)

Here’s a poem and a song from Alice in Wonderland to get you in the mood.  First the poem:

How I wonder what you’re at!

Up above the world you fly,

How I wonder where you’re at!

Curiouser and curiouser! (I was so much surprised, that for the moment I quite forgot how to write good English.)

This article was posted on Friday, February 19th, 2010 at 12:07 pm and is filed under Alice in Wonderland, Alice's Adventures in Wonderland, Authors, Books & Stories, Childrens Stories, Countries & Cultures, England, English, Languages, Lewis Carroll, Movies, TV & The Internet, Online Books, United Kingdom. You can follow any responses to this entry through the RSS 2.0 feed. You can skip to the end and leave a response. Pinging is currently not allowed.

4 Responses to “Alice in Wonderland the Movie and Book”