A place for poems, songs, rhymes, and traditions from around the world for both kids and grown-ups to enjoy!
Advertisement
Mate – A South American Drink like Coffee or Tea
June 17th, 2011

Mate is a drink from South America that’s made by steeping yerba mate leaves in hot water. It’s traditionally drunk out of a gourd (called a mate) with a straw. Mate is usually shared with family and friends in a social setting. It’s the national drink of Uruguay. 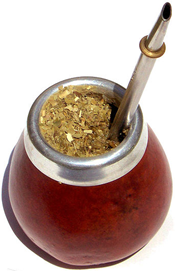 Oscar Teliz sent me a song called En un convento from Uruguay a while back that mentions mate.  I asked him about the drink and here’s what he replied:

Well, have a seat, this is going to take a while :-). Mate is a native herb from South America, as you may know. It is a stimulant, and in some cases, it could be cathartic. Most people claim that is what makes them regular. In places like Uruguay, Argentina and Paraguay, and even in parts of Brazil, it is the beverage of choice. Some people sweeten and flavor it with other herbs and dried orange rinds, but mostly, it is taken straight up.

Some people "must" have mate in the morning, or they can’t function. For many others, it has taken the place of the "5 o’clock tea". And it’s a social phenomenon also. Because, you must share. Usually, people sit down and have tea, eat some kind of peasant bread with butter or "bizcochos" (pastries), chat and have the mate passed around.

Mate has to be prepared with care. You fill your gourd about two thirds of the way. You take warm water, to moisten the herb. Meanwhile, the water is warming up in the kettle. Now, this is very important. Water must not boil. It must be transferred to your Thermos bottle, right before it boils. If it boils, the air contents in the water dissipates and affects the flavor. So, never let the water fully boil, as soon as you see steam, take it out of the fire.

Now, the herb in the gourd is moistened, insert the bombilla (straw) to one side and create a mound on the opposite side. Fill with water and proceed to drink. All of it must be sucked out. As soon as it is basically empty of water, you fill it again and pass it to the next person, and then just repeat.

Then again, some people are so hooked, they just keep drinking it by themselves. And carry it even when they go out. Yes, it is mildly habit forming, once you develop a taste for it [like coffee]. And about your "bizcochos" or in Argentine lingo "factura", there are some Argentine-Uruguayan bakeries in the  Elmhurst/Corona area (in New York city) to try them.

The gourd is what we call mate. It’s a dried up non edible gourd that is used as the container. Available in some of those aforementioned bakeries.They are also inexpensive, and even if you do not drink mate, they are often carved or otherwise adorned and highly decorative.

Note from Mama Lisa: I cheated and bought the tea bag type of Yerba Mate that’s available readily in Food Stores in the US.  See the photo below… 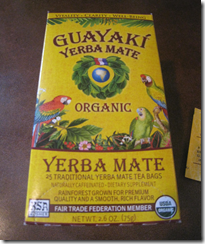 I prepared it with hot (not boiling water) and let it steep for about 8 minutes. 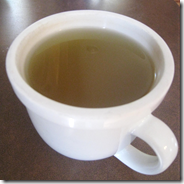 I’m drinking it right now, plain.  Yum!  It has a sort of smoky herbal taste almost like strong, toasted, slightly bitter green tea… not exactly, but it’s the closest I can come to describing it.  Would anyone else like to describe the taste of yerba mate?  Feel free to comments below.

Many thanks to Oscar Teliz for telling us about the tradition of drinking mate in Uruguay and South America.

This article was posted on Friday, June 17th, 2011 at 4:03 pm and is filed under Countries & Cultures, Drinks, Mate, Recipes of the World, Uruguay. You can follow any responses to this entry through the RSS 2.0 feed. You can skip to the end and leave a response. Pinging is currently not allowed.