A place for poems, songs, rhymes, and traditions from around the world for both kids and grown-ups to enjoy!
Advertisement
A Visit to the Ginkaku-ji Temple & Zen Garden in Japan
June 7th, 2016 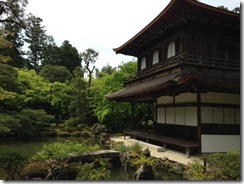 "I went to Kyoto and visited the Ginkaku-ji Temple.

Ginkaku-ji Temple translates as the "Temple of the Silver Pavilionâ. It’s a world cultural heritage site here in Japan.

The Japanese Shogun Ashikaga Yoshimasa commissioned the temple as a retirement home. He was a Buddhist, so he made plans for the structure to become a Zen Buddhist temple after his death. 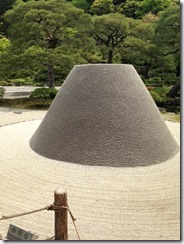 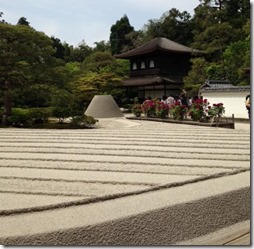 The structure of the temple and its garden are beautiful and impressive. I like the traditional style of Japanese gardens.  The gardens of Buddhist temples are traditionally made for contemplation and meditation.  Rock, sand and gravel are an important aspect of them. The garden at Ginkaku-ji has a massive sand cone named "Moon Viewing Platform". It’s said to symbolize Mt. Fuji.

When I visited, the fresh green leaves around the temple area were very beautiful. It was a perfect time to take a walk through part of Kyoto on The Philosopher’s Path which starts at the Ginkaku-ji temple. 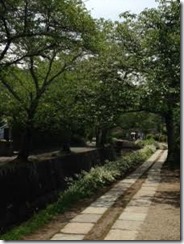 Along the Philosopher’s Path there are small shops. In one of the shops, II  got a traditional Kyoto sweet called Yatsuhashi. It’s bean paste wrapped in rice paper sheets. Now there are over 20 flavors of it. I chose nikki (cinnamon), sakura (cherry blossom) and green tea which are all very common. Nowadays, young people like the flavors of chocolate, lemonade, strawberry, among others. 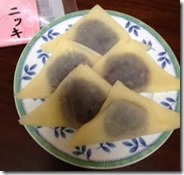 I also got chopsticks as a souvenir in a small shop. On the top of chopsticks, they put a design like nail art. It’s impressive that the chopsticks are mixture of traditional and modern designs. 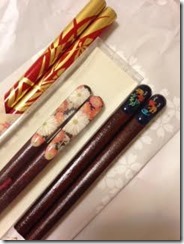 Thanks for sharing info about your visit to the Ginkaku-ji Temple and the Philosopher’s Path, Ayako! -Mama Lisa

Here’s a Recipe for Yatsuhashi if anyone would like to try it.

This article was posted on Tuesday, June 7th, 2016 at 7:22 pm and is filed under Countries & Cultures, Japan, Japan, Japanese Cuisine, Traveling. You can follow any responses to this entry through the RSS 2.0 feed. You can skip to the end and leave a response. Pinging is currently not allowed.