A place for poems, songs, rhymes, and traditions from around the world for both kids and grown-ups to enjoy!
Advertisement
2016 Words of the Year
November 29th, 2016 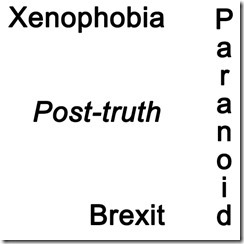 It’s an annual tradition for different English dictionary companies to announce a word that encapsulates that year. They call it the Word of the Year. Judging by the words picked for 2016, this has not been a good year.

Here are the words for 2016 in English with their definitions. You’ll also find the reasons each dictionary company picked their word of the year.

1. Fear or hatred of foreigners, people from different cultures, or strangers…

2. Fear or dislike of the customs, dress, etc., of people who are culturally different from oneself:

Learning a foreign language can help to overcome xenophobia.

Why the dictionary company chose this word:

"At Dictionary.com we aim to pick a Word of the Year that embodies a major theme resonating deeply in the cultural consciousness over the prior 12 months. This year, some of the most prominent news stories have centered around fear of the ‘other’…  The largest spike in our data for the term xenophobia this year occurred on June 24 with a 938% increase in lookups… This was the day after the UK voted to leave the European Union as the result of a much debated referendum, also known as Brexit. Another lookup trend that was influenced by the Brexit vote: user interest in the term hate crime soared in the month of July as newspapers covered an increase in crimes motivated by prejudice in post-Brexit UK."

Note: We at Mama Lisa’s World feel it’s our job to help fight against Xenophobia.

The withdrawal of the United Kingdom from the European Union.

Here’s what the company had to say about why they chose this word:

"We believe that the obvious increased use of âBrexitâ (up 3,400 percent in 2016), its significant impact in British politics and Britain’s exit from the EU make it a word not only primed for history books but also as Collins’ Word of the Year… It has divided the country, brought down a prime minister and been a gift to headline writers everywhere…"

Relating to or denoting circumstances in which objective facts are less influential in shaping public opinion than appeals to emotion and personal belief:

âin this era of post-truth politics, it’s easy to cherry-pick data and come to whatever conclusion you desireâ

Here’s why the dictionary chose this word:

"The concept of post-truth has been in existence for the past decade, but Oxford Dictionaries has seen a spike in frequency this year in the context of the EU referendum in the United Kingdom and the presidential election in the United States. It has also become associated with a particular noun, in the phrase post-truth politics...

Post-truth has gone from being a peripheral term to being a mainstay in political commentary, now often being used by major publications without the need for clarification or definition in their headlines."

Anxious because you do not feel you can trust others, or medical suffering from paranoia:

My husband is very paranoid about making sure everythingâs locked.

Here’s why the dictionary chose this word:

"As ever, global events are reflected in the words you look up on our site. So what single word has had the biggest increase in searches over the whole year? Ladies and gentlemen, the Cambridge Dictionary Word of the Year for 2016 is . . . paranoid… Searches have risen hugely this year, over four times more than in 2015. We cannot, of course, know exactly why users are searching for a particular word, but it suggests perhaps a feeling that the institutions that have kept us safe can no longer be trusted, that the world feels more uncertain than it did a year ago.

But perhaps itâs not all doom and gloom: another word that has seen a big increase in searches is adorable â maybe our users are comforting themselves with videos of cute animals, and trying to think happier thoughts?"

Please feel free to comment below if you notice any other dictionaries release their Word of the Year. We’d also be interested to learn the word of the year in other languages.

This article was posted on Tuesday, November 29th, 2016 at 10:09 pm and is filed under Countries & Cultures, England, English, Languages, USA, Words & Phrases. You can follow any responses to this entry through the RSS 2.0 feed. You can skip to the end and leave a response. Pinging is currently not allowed.