"For some reason it struck me maybe I could use the internet to figure out what and why my grandmother used to recite a saying when it doesn't even rhyme. I found a rhyme about Periwinkle 'come out of your shell or I'll beat you like a bell'. She, a very 'down-home' WASP from the distal Eastern Shore Virginia in Accomac... (born 1886, died 1967) would recite the following rhyme. I was 9 to 14 when I was around her much, so maybe I misremember it, but I don't think so.…" –Patricia

A periwinkle is a type of snail. The lore is that if you chant to a periwinkle snail it will come out of its shell! 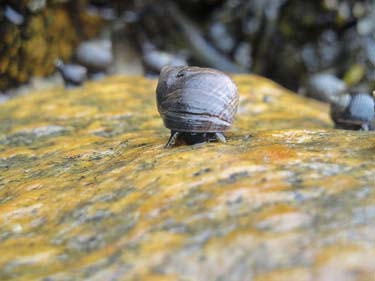 Periwinkle, periwinkle
Come out of your shell
I'll give you $5
And a barrel of corn.

Periwinkle, periwinkle
Come out of your shell
I'll give you $5
And a barrel of corn.

I found this version below in English dialect in a book called "Negro Folk Rhymes". It's very similar to Patricia's grandmother's rhyme… -Mama Lisa

In standard English it goes….

Patricia wrote, "Looking at these other rhymes and the fact that periwinkles have horns, maybe horn was in there somewhere, or she had heard it with horn and corrupted it, because at least that rhymes with corn!"

Another possibility is that "periwinkle" used to rhyme with "shell". -Mama Lisa

Here's another version I found…

Periwinkle, periwinkle
Come out of your shell
Don't! I'll beat you cold
As a fire coal, as coal.

Hanna wrote, "I googled the Periwinkle chant that we used to sing as kids on the Eastern Shore of Virginia. My grandmother was from Lithuania. She lived in Cape Charles, VA and we used to visit her every summer.

The kids would gather on the beach and find periwinkles in the wet sand. We would chant, 'Periwinkle, Periwinkle stick out your horn. I'll give you five dollars and a bag of corn.'

It's quite similar to the other versions and was perhaps a local custom as Accomac, VA is close to Cape Charles.

Thank you for posting this and helping me to understand why we did that." -Hanna Tiferet Siegel

Thanks to Dr. Patricia Burke of Providence, Rhode Island for sharing this rhyme with us and for commenting on it! Thanks to Hanna Tiferet Siegel for sharing her version!