A place for poems, songs, rhymes, and traditions from around the world for both kids and grown-ups to enjoy!
Advertisement
Strawberry Soda Recipe for Juneteenth
June 18th, 2021 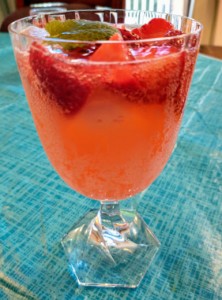 Juneteenth celebrates the dayÂ the last slaves inÂ the U.S. learned that slavery had been abolished and they were free. Even though slavery was officially abolished by Abraham Lincoln in the US in 1862,Â the Confederate South didn’t enforce the law. June 19th, 1865 is when Union troops finally reach the last holdout of the Confederacy and read out loudÂ a proclamation that slavery had been abolished.

This is an exciting year because just yesterday, the US government declared that Juneteenth is an official federal holiday starting immediately!

Juneteenth has been celebrated since 1866 in some states. So the holiday already has many traditions. One of them is makingÂ red food and drinks, including Strawberry Soda!

According to Afroculinaria, “The practice of eating red foods -red cake, barbecue, punch and fruit- may owe its existence to the enslaved Yoruba and Kongo brought to Texas in the 19th century. For both of these cultures the color red is the embodiment of spiritual power and transformation. Enslavement narratives from Texas recall an African ancestor being lured using red flannel cloth, and many of the charms and power objects used to manipulate invisible forces required a red handkerchief.”

Many people also seeÂ red as a symbol of the bloodshedÂ and resilience of the slaves.

One wayÂ toÂ recognize Juneteenth is to make Strawberry Soda. I’d like to share my recipe below…

1. Make strawberry syrup byÂ placing in a small pot 6 tablespoons of Sugar, 1/4 cup of Water, 6 sliced Strawberries and 2-3 chopped up Mint leaves and bring to a boil.Â Then lower to a simmer until thick like a syrup.Â Puree the mixtureÂ using a potato masher or an immersion blender until smooth. Then let cool.

3. PourÂ the sparkling water or club soda into a large cup. Add 1 teaspoonful of lemon juice. Then addÂ 4 tablespoons of the strawberry syrup and mix. You can add more lemon juice and syrup to taste. Stir the mixture. Serve over ice and garnish with slices of strawberries and a mint leaf.

Adults can optionally add a tablespoon of Vodka or Rum.

This article was posted on Friday, June 18th, 2021 at 9:12 pm and is filed under Countries & Cultures, Drinks, Holidays Around the World, Juneteenth, Juneteenth Recipes, Mama Lisa, Strawberry Soda Recipe, USA. You can follow any responses to this entry through the RSS 2.0 feed. You can skip to the end and leave a response. Pinging is currently not allowed.