A place for poems, songs, rhymes, and traditions from around the world for both kids and grown-ups to enjoy!
Advertisement
Touring Amish Country
September 11th, 2007

Last month we brought our children to the Amish country in Lancaster, Pennsylvania.

The Amish are a group of Christians originally from Germany, Switzerland and the Alsace region of France. They immigrated to the US in the 18th century. They believe in being separate from the society around them.

Amish people don’t use electricity, automobiles or other modern conveniences. Amish kids don’t use bicycles (though they do use Amish style scooters).

When you visit a region where the Amish live, you can see them driving around in horse drawn buggies. If you’d like, you can even get a tour of the area in a buggy. That’s what we did. Our driver was very nice and he gave our kids an extra thrill by letting them take turns driving it. 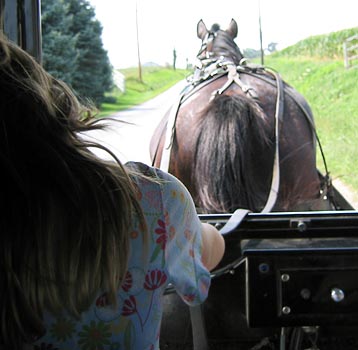 Driving around Amish country, you can see the dresses and clothes the Amish wear hanging out to dry. The Amish prefer dark colors: black, maroon, deep blues and purples. The women wear dresses that hang below the knee with bonnets covering their heads. The men wear pants, shirts, jackets and hats. Married men don’t shave off their beards.

Our buggy driver had been Amish as a child and he welcomed questions about the culture. Of course we had a bunch!

Do the Amish have plumbing? Yes, they have indoor plumbing. Do they use anything for heat? Yes, they use coal stoves and generators. The important thing is that they don’t have to rely on the outside world for their energy (like an electric company). Do they pay taxes? Yes, they do – but not Social Security (a tax that you pay in the US to help old people afford to live after they retire). They don’t pay Social Security because they sign a waiver that they won’t receive it when they grow old. Do Amish people go to doctors? Yes, they do. They don’t generally use telephones unless it’s for something like a medical emergency.

We noticed that some of the Amish houses we passed on our buggy ride had aluminum siding. We were curious if it was all right for the Amish to buy supplies from the outside world. (It was hard to imagine them manufacturing aluminum siding.) Our driver said the Amish will, in fact, sometimes buy equipment from outside their community.

My son asked if the Amish observe any holidays. Our driver said they celebrate Easter and Christmas.

Then we asked a general question about schooling. He said many Amish go to school in one room school houses run by the Amish instead of going to public schools. They only attend school until the 8th grade. 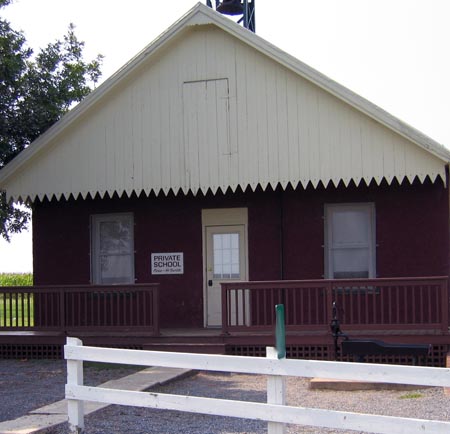 Finally, our driver told us about how the Amish organize themselves (at least in the Lancaster area where he grew up). He said that several households will make up a church district. The members meet every other Sunday for a service that is held in a member’s house (as opposed to a church). The following Sunday will be devoted to spending the day together as a community.

Much of Amish lifestyle is geared towards spending time together as a family or community. You can see this when you tour, when you often see whole families farming together.

Finally, we reached our destination, an Amish house and store. There we bought root beer floats made by two Amish boys. They said their mother had made the root beer herself.

It was interesting to see such a totally different way of life. I’m glad my children were able to see that people can live so differently, even in their own country.

There are indeed other ways to live, outside of our information packed, high-speed, electronic world – interesting and lively though it is!

(By the way â It’s important to remember, the Amish aren’t putting on a show for our benefit. They’re real people, going about their real lives. So if you do visit their area, treat them with respect and courtesy. One thing in particular to keep in mind is that Amish don’t like being photographed, so don’t take any snapshots of them without explicit permission.)

This article was posted on Tuesday, September 11th, 2007 at 7:39 pm and is filed under Amish, Amish Country, Mama Lisa, Pennsylvania, Traveling, USA, USA. You can follow any responses to this entry through the RSS 2.0 feed. You can skip to the end and leave a response. Pinging is currently not allowed.

One Response to “Touring Amish Country”