A place for poems, songs, rhymes, and traditions from around the world for both kids and grown-ups to enjoy!
Advertisement
Tipping in France for the Holidays
December 23rd, 2012

Traditionally, we tip the mailman: he or she brings everyone a calendar which includes a lot of information 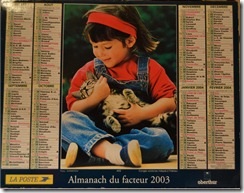 about the post office, and also about all the towns in the "dÃ©partement" (i.e. county).  There are 95 different types of material given since there are 95 "dÃ©partements" in mainland France.  Plus the calendar lists the Saints’ Days in alphabetical order, and some other info depending on the publisher.  (See photo of calendar, which you can click on to see a larger version & zoom in.)

I think people give from 10 to 15 euros to the mailman, but some give more than that, some give less and some don’t give anything at all.  The harder life is the less they give.

We also tip the firemen, who in rural areas are often volunteers.  They also bring a calendar featuring scenes in which they rescue people and save lives.  Many give them 10 to 15 euros.

We also tip the garbage men, they get less, 1 to 5 euros in general. Ours (where I live, I mean, not all over the country)  bring a tiny calendar in A6 size. Now, between you and me, since they started knocking at people’s doors sooner and sooner -last time I heard of them it was around Nov. 20th I don’t know how long ago. Now, if I hear them coming, I turn off the lights and pretend I’m not here, they bug me! All in all, I haven’t seen many of them in the last years, maybe they don’t come or I’m actually not home when they do.

In buildings in cities, people used to tip the janitor but the fact is that there aren’t many janitors left if any.

No, we don’t tip our hairdresser for the holidays, but every time we go there, we leave a small tip in the little basket that usually stands on the cash desk for the people who took care of us; then they share it I suppose.

You can read more about tipping around the world here.

This article was posted on Sunday, December 23rd, 2012 at 3:05 pm and is filed under Christmas, Countries & Cultures, Customs and Traditions, France, French, Gift Giving, Holidays Around the World, New Years, Tipping. You can follow any responses to this entry through the RSS 2.0 feed. You can skip to the end and leave a response. Pinging is currently not allowed.

One Response to “Tipping in France for the Holidays”