A place for poems, songs, rhymes, and traditions from around the world for both kids and grown-ups to enjoy!
Advertisement
The Celebration of Santa Lucia in Italy
December 13th, 2011 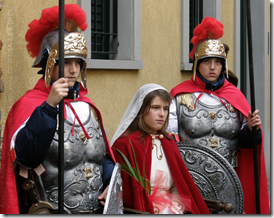 Gian Carlo Macchi wrote to me about Santa Lucia in Italy.  He also shared these photos from the Santa Lucia celebration in Arzago d’Adda, Lombardy (about 30 km from Bergamo and 30 km from Milan).

Santa Lucia (St. Lucy) was born in Syracuse, Sicily around 283 and died in 303 AD. The myth is that her parents wanted her to marry a certain man, but she didnât want to get married. She wanted to devote her life to helping the poor. In protest against the marriage, she poked out her eyes and put them on a platter and sent them to the man. The legend is that her eyes were miraculously restored by God. 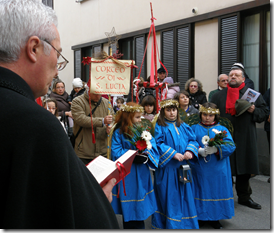 Itâs said that Saint Lucia blinded herself on the shortest, darkest day of the year, which is the Winter Solstice. Under the old Julian calendar, that day was December 13th. Thatâs how St. Luciaâs day came to be celebrated on the 13th. After the Winter Solstice the days get longer. So St. Lucia is a celebration in part of the coming lengthening of the days.

"About the celebration of Santa Lucia in Italy, it’s different from place to place.

Here in Lombardy, the province of Bergamo, Santa Lucia gives gifts to children. In the past, when I was a child, on the night between the 13th and 14th of December, people, to preserve their eyes, used to touch their eyelids with water that, during that holy night, turned into holy water. I also remember that, at that time, the children put on the window sill some food for the little donkey of Santa Lucia. Now this tradition survives in another Lombard province, Brescia, where the food for the donkey is yellow meal and milk.

Gian Carlo also shared the Italian song Santa Lucia.  (Check it it out at the link.)

Thanks for sharing your photos Gian Carlo, the song and for telling us about Santa Lucia in your region of Italy. 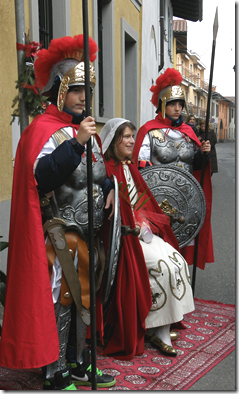 This article was posted on Tuesday, December 13th, 2011 at 8:59 pm and is filed under Countries & Cultures, Holidays Around the World, Italy, Photos, Photos of People, Photos of Places, Santa Lucia, St. Lucia's Day. You can follow any responses to this entry through the RSS 2.0 feed. You can skip to the end and leave a response. Pinging is currently not allowed.

2 Responses to “The Celebration of Santa Lucia in Italy”