A place for poems, songs, rhymes, and traditions from around the world for both kids and grown-ups to enjoy!
Advertisement
Superstitions about the Month of May
May 7th, 2012

Itâs fascinating to learn about old superstitions.  Here are some that were practiced in England during the month of Mayâ¦ My favorite is bathing your face in the morning dew in the grass on May 1st to make you more beautiful.

âThe month of May is quite an old-maid’s garden; filled with all varieties of superstitions, some of which may be classed as weeds and the others as flowers, but most of which have but little root in the well-known cheerful character of the monthâ¦ for May is not considered a favourable month for happy marriages. Thus, also, to bathe the face in dew that lies upon the morning grass was considered on the First of May to be as beneficial as the bath of beauty in the fairy talesâ¦ 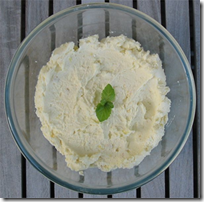 Various divinations are in several counties practiced during this month. In Northumberland, for instance, they fish with a ladle for a wedding-ring that has been dropt into a bowl of syllabub [a thick English dessert, see photo]â¦ and whoever is the fortunate angler will, as sure as there are gudgeons in the sea, be married first.

A slower kind of divination is, also, practiced with snails – a curious team to harness to the fortuneteller’s chariot. The process is best described in the’ following pastoral revelation, that smacks very strong, we must say, of the gooseberryâ¦â

Last May-day fair I search’d to find a snail That might my secret lover’s name reveal: Upon a gooseberry bush a snail I found, For always snails near sweetest fruit abound. I seiz’d the vermin; home I quickly sped, And on the hearth the milk-white embers spread. Slow crawl’d the snail, and it I right can spell, In the soft ashes ink’d a curious L: Oh! may this wondrous omen lucky prove! For L is found in Luberkin and Love. With my sharp heel I three times mark the ground, And turn me thrice around, around, around.

Sweet!  Have a Merry Month of May!

This article was posted on Monday, May 7th, 2012 at 2:19 pm and is filed under Countries & Cultures, England, English, Folk Lore, Holidays Around the World, Languages, May Day, Seasonal, Superstitions. You can follow any responses to this entry through the RSS 2.0 feed. You can skip to the end and leave a response. Pinging is currently not allowed.