A place for poems, songs, rhymes, and traditions from around the world for both kids and grown-ups to enjoy!
Advertisement
Sumer is icumin in – A Beautiful Old Canon
August 9th, 2012

Sumer is icumen in is possibly the oldest canon in print (circa 1226 a.d.)  It was written in Middle English.  You can read the original here, followed by a translation into modern English and a lovely YouTube rendition by two girls. 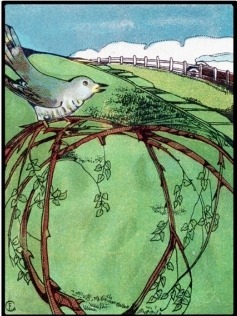 Sumer is icumen in

Summer has come,
Loudly sing cuckoo!
Seeds grow, and meadow blooms
And the woods bud anew,
Sing cuckoo!
The ewe bleats after the lamb,
The cow moos after the calf,
The bullock leaps, the buck farts,
Merry sing, Cuckoo!
Cuckoo! Cuckoo!
Well you sing Cuckoo,
Nor cease you never nowâ¦

Translation by Mama Lisa.  You can learn more about Sumer is iumen in on Mama Lisa’s World England Song Pages.

This article was posted on Thursday, August 9th, 2012 at 9:06 am and is filed under Canons, Countries & Cultures, England, English, Languages, Middle English, Music, Songs by Theme, Traditional Music, YouTube. You can follow any responses to this entry through the RSS 2.0 feed. You can skip to the end and leave a response. Pinging is currently not allowed.