A place for poems, songs, rhymes, and traditions from around the world for both kids and grown-ups to enjoy!
Advertisement
Stupas – Buddhist Spiritual Monuments
February 13th, 2012 We take a lot of hikes and recently we’ve been coming upon arrangements of stones stacked on top of each other like those in the photo.  I couldn’t help but wonder if there’s a significance to these sculptures?

My cousin, James Yannucci, who has travelled all over Asia and lives in China saw my photo and wrote:

"It’s done all over the Himalayas. It’s done for prayer and is similar to a small stupa. I’ve seen these done in Nepal, India, Bhutan and Tibet, sometimes high in the mountains in places you would not expect people to be.

It symbolizes a stupa. A stupa is a solid structure (no rooms, filled with soil) that Buddhists walk clockwise around chanting their mantra and spinning prayer wheels. Here is a photo of a large stupa in India.  Stupas often contain relics and are used by Buddhists as a place of worship.  They’re considered to be spiritual monuments. 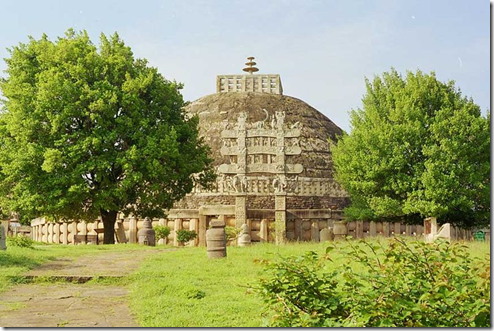 Photo of Stupa in Sanchi, India (from Wikipedia).

Thanks for sharing James!

This article was posted on Monday, February 13th, 2012 at 3:03 pm and is filed under Bhutan, Buddhist, Countries & Cultures, Customs and Traditions, India, Indonesia, Japan, Nepal, Stupas, Tibet. You can follow any responses to this entry through the RSS 2.0 feed. You can skip to the end and leave a response. Pinging is currently not allowed.