A place for poems, songs, rhymes, and traditions from around the world for both kids and grown-ups to enjoy!
Advertisement
RIP Iona Opie, Collector of English Nursery Rhymes
November 1st, 2017 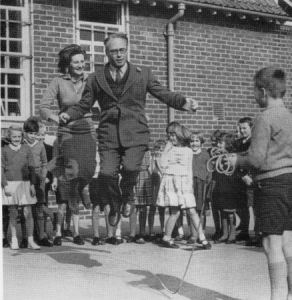 The folklorist, Iona Opie died on October 23rd. She was 94 years old.

Iona and her husband Peter compiled one of the most comprehensive books about English nursery rhymes called The OxfordÂ Dictionary of Nursery Rhymes (1951).Â  As a fellow collector of rhymes and songs, I have great respect for them.

Their collection began when Iona was pregnant in 1943.Â  She and Peter were taking a walk when she picked up a ladybug and recited the rhyme:

Your house is on fire and your children all gone.

That started them wondering about the origins of this rhyme.

They went toÂ a public library to see what they could find on the subject and were given another famous Nursery Rhyme book. ItÂ was written and collected by James O. HalliwellÂ and called “Nursery Rhymes of England” (1842). From that moment on, they startedÂ research into the origins of English nursery rhymes.

Over the years they wrote many books about the folklore of England. What a richer place the world is since we had the Opies collecting and preserving a part of our culture.

This article was posted on Wednesday, November 1st, 2017 at 9:17 pm and is filed under Countries & Cultures, England, English, English Nursery Rhymes, Iona & Peter Opie, Languages, Mama Lisa, Nursery Rhymes, USA. You can follow any responses to this entry through the RSS 2.0 feed. You can skip to the end and leave a response. Pinging is currently not allowed.