A place for poems, songs, rhymes, and traditions from around the world for both kids and grown-ups to enjoy!
Advertisement
Princess Party – Wrapping It Up – Part 5
September 8th, 2006

Previously, I wrote about having a quest as part of a kids party. At my daughter’s party, we did a crown craft after the quest, which turned out to be a bit of a mistake. If you’re going to do a craft, I’d recommend doing it before the quest. After the quest the kids are all excited and not as interested in sitting down to do a craft.

Finally, we sang happy birthday. I had made a castle cake, using a castle Bundt pan I had purchased. It was a quick and easy way to make a castle cake, since time was an issue for me. I added McCormick’s Neon Pink food coloring to white cake mix and white icing to make both pink. We decorated the cake with wafers, jelly beans, and other candy. I found tall thin candles which made the castle look more majestic. 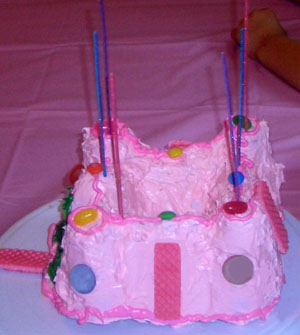 I also had purchased stuff for ice cream sundaes in case there was extra time at the end of the party before the parents arrived. We did end up making them.

I think it’s a good idea to have extra activities in case your party ends early and the parents aren’t there to get their kids.

I have to say I’m very happy to have held a kiddy party in our house for my daughter. I think it gave her a nice opportunity to interact with her friends all at once, at our house, at a special event that was planned just for her. 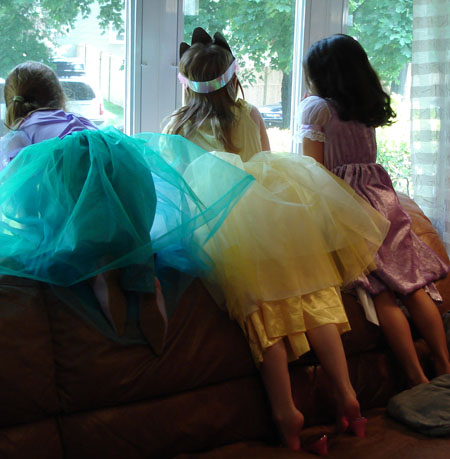 Judging by the smiles on the kids’ faces when they left, they all had a good time too!

This article was posted on Friday, September 8th, 2006 at 10:53 am and is filed under Birthdays, Holidays Around the World, Kids Parties, Mama Lisa, Parties, Princess Parties, Tea Parties. You can follow any responses to this entry through the RSS 2.0 feed. You can leave a response, or trackback from your own site.

One Response to “Princess Party – Wrapping It Up – Part 5”