A place for poems, songs, rhymes, and traditions from around the world for both kids and grown-ups to enjoy!
Advertisement
Portrait of Shakespeare – It might be him… yet it just might not…
March 9th, 2009

A lot of mystery still surrounds the life of William Shakespeare (1564 – 1616).  No one can really say for certain… but this is now believed by some scholars to be the only portrait painted of Shakespeare that he actually sat for during his lifetime.  It’s thought to have been painted in 1610, when he was 46 years old. 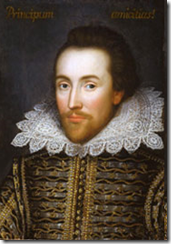 What some scholars find interesting about it is that if it is Shakespeare, he appears to be more affluent than previously thought.

Not all scholars are convinced that it is actually Shakespeare though.

You can see other “portraits” of Shakespeare online at the BBC – most thought to have been done posthumously.

You can read more about why this portrait is thought to be authentic and about its history at The Shakespeare Birthplace Trust and other points of view about it at Times Online – Is this the real Shakespeare at last?

This article was posted on Monday, March 9th, 2009 at 4:51 pm and is filed under Arts and Crafts, Authors, Books & Stories, Shakespeare. You can follow any responses to this entry through the RSS 2.0 feed. You can leave a response, or trackback from your own site.