A place for poems, songs, rhymes, and traditions from around the world for both kids and grown-ups to enjoy!
Advertisement
Needlework Throughout the Ages
March 23rd, 2010

“I Write the Needle’s Praise.”

Project Gutenberg, a repository of public domain e-books, recently released The Art of Needle-work, from the Earliest Ages (1841), by Elizabeth Stone.

What’s interesting is Stone’s view and discussion of women in society in the mid 19th century:

…it is no new remark that they [women] are comparatively lightly thought of by the “nobler” gender…Women are courted, flattered, caressed, extolled; but still the difference is there, and the “lords of the creation” take care that it shall be understood. Their own pursuits. are noted down for immortality: whilst a woman with as much sense… steals noiselessly through her appointed path in life…

Those words may seem bold for the times, until Stone continues:

And this is but as it should be. Woe to that nation whose women… seek to intrude on the attributes of the other sex… a most unsuccessful pursuit of publicity, or power, or fame… the high, the noble, the lofty, the pure… vocation of their sex. It is hers to soothe pain, to alleviate suffering, to soften discord, to solace the time-worn spirit on earth. 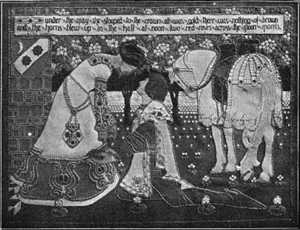 It’s important to remember Stone is a product of her times.  Finally, we get to the subject of needlework:

And if we look for that feminine employment which adds most absolutely to the comforts and the elegancies of life, to what other shall we refer than to NEEDLEWORK?.

How sings our own especial Bard?-

“So long as garments shall be made or worne;
So long as hemp, or flax, or sheep shall bear
Their linnen wollen fleeces yeare by yeare;
So long as silkwormes, with exhausted spoile
Of their own entrailes, for mans gaine shall toyle:
Yea, till the world be quite dissolv’d and past,
So long, at least, the NEEDLE’S use shall last.”

The remainder of the book talks about women and needlework in different times in history. This passage below is from the chapter on ancient Egypt:

Tokens of friendship consisting of richly embroidered veils, handkerchiefs, &c., were then, as now, passing from one fair hand to another, as pledges of affection.

Stone also talks about tapestries, embroidery and costumes throughout history. The book is also filled with quotes in literature about needlework.  I’ll leave you with a few chosen ones here:

Flowers, Plants and Fishes, Beasts, Birds, Flyes, and Bees,
Hils, Dales, Plaines, Pastures, Skies, Seas, Rivers, Trees,
There’s nothing neere at hand, or farthest sought,
But with the Needle may be shap’d and wrought.
John Taylor. 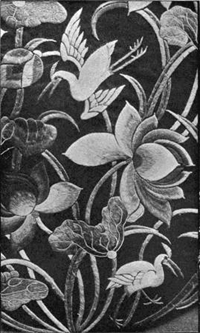 For here the needle plies its busy task,
The pattern grows, the well-depicted flower
Wrought patiently into the snowy lawn,
Unfolds its bosom; buds, and leaves, and sprigs,
And curling tendrils gracefully dispos’d,
Follow the nimble fingers of the fair;
A wreath that cannot fade.
Cowper.

As ladies wont
To finger the fine needle and nice thread.
Faerie Queene. 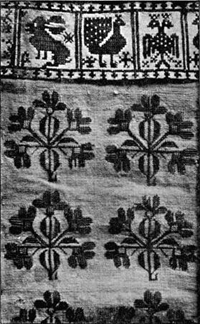 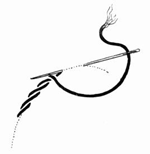 Note: The images above come from Art in Needlework, by Lewis F. Day and Mary Buckle.

This article was posted on Tuesday, March 23rd, 2010 at 11:53 am and is filed under Arts and Crafts, Books & Stories, Needlework, Online Books. You can follow any responses to this entry through the RSS 2.0 feed. You can skip to the end and leave a response. Pinging is currently not allowed.

One Response to “Needlework Throughout the Ages”