A place for poems, songs, rhymes, and traditions from around the world for both kids and grown-ups to enjoy!
Advertisement
La Befana and Bonfires in Italy for the Holidays
December 19th, 2013

In parts of Italy, La Befana is the one who gives gifts to children instead of Santa Claus.  She does this on the night of the Epiphany on January 5th.  That’s when the 3 Wise Men are said to have given their gifts to Jesus.   La Befana goes around leaving presents for children, in imitation of the Three Wise Men. Befana looks like a friendly witch, with a mole on her face, wearing tattered clothes. She flies on a broom and goes down chimneys to deliver toys to the girls and boys.

Emanuela wrote from northern Italy about another custom involving La Befana and a bonfire:

"On the evening of January 5th, we burn an effigy of the old woman on a bonfire that we call Panevin.  [Panevin comes from from ‘pan e vin’ â ‘bread and wine’, alluding to the poor food that’s consumed during the event].  The Befana that burns is made of rags.

Once, long ago, we took fire from a trunk that burned on Christmas Eve to start the bonfire. Now, we take it from the Easter candle from the church.

We sing songs to invoke good luck for food in the New Year and eat Pinza. Pinza is made with products of the earth that last until spring, even if dried.  Pinza is a typical cake made with pumpkin, dried figs and raisins. Some use corn flour instead of pumpkin. This is the typical cake made for January 6, the feast of the Epiphany. 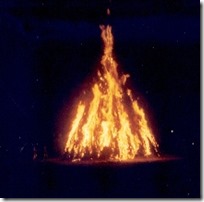 In the province of Treviso, where I live, we make a big, big bonfire. In the mountains, ski instructors descend on skis and they carry lit torches. They light the fire with fire from the torches."

Thanks for sharing your traditions with us Emanuela!

This article was posted on Thursday, December 19th, 2013 at 4:46 pm and is filed under Countries & Cultures, Epiphany, Holiday Recipes, Holidays Around the World, Italy, La Befana Day, Panevin, Pinza. You can follow any responses to this entry through the RSS 2.0 feed. You can skip to the end and leave a response. Pinging is currently not allowed.