A place for poems, songs, rhymes, and traditions from around the world for both kids and grown-ups to enjoy!
Advertisement
Just a thought about Aliens
September 30th, 2010

I was just listening to a podcast about the "Goldilocks" planet called Gliese 581G.  It has all the right conditions for life.  It’s at the right distance from the sun, it has the perfect amount of gravity to have an atmosphere and keep it from dissipating away.

There are 6 planets in the Gliese 581 solar system.  Here’s the interesting part:  The solar system is so small, it fits inside the Earth’s orbit.  Its sun is a red dwarf, about a third the size of our sun.  At first I thought this meant the "Goldilocks" planet was much smaller than Earth, but at it turns out, its 3 times bigger. 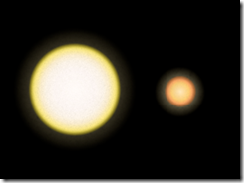 Our Sun compared to Gliese 581

Going back to when I thought the planet was much smaller than Earth, I started to imagine a race of little intelligent beings.  We always think that aliens, if they exist, would be our size.  Why is that?  They could end up being much much bigger or much much smaller.  Just think of the hugeness of dinosaurs or the smallness of ant colonies (or even smaller microbial colonies) here on Earth.

The Universe is a big mystery, who knows what’s out there!

This article was posted on Thursday, September 30th, 2010 at 10:13 am and is filed under Aliens, Folk Lore. You can follow any responses to this entry through the RSS 2.0 feed. You can leave a response, or trackback from your own site.