A place for poems, songs, rhymes, and traditions from around the world for both kids and grown-ups to enjoy!
Advertisement
Graduations in the US and France
February 3rd, 2013 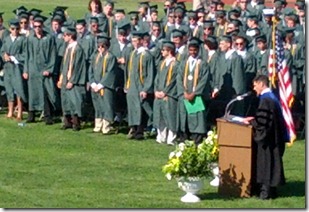 In France, schools don’t have ceremonies.Â  Here’s what Monique wrote about graduations in France:

I’ve never gone to a graduation, our final exam is something totally different: you take an exam and some days later either you check the newspaper or you go to the high school where you took it and check the lists that say “admis” (i.e. passed) or “non admis” (not passed) and that’s all â though nowadays they probably check the internet.Â  Also, some of the tests are taken at the end of 11th grade.Â  There’s no ceremony and no party -unless you planned it, but there’s no tradition, some have a party with their friends, some don’t.

When I passed my “bac” 42 years ago, there wasÂ a family gathering -my dad’s dad wanted champagne because I was his first grandchild to pass it and my mom was somewhat pissed because they didn’t really have extra money for such fancies as champagne which was, comparatively to now, far more expensive.

I think that some universities (Medicine, Law, Pharmacy) have some sort of ceremony with special outfits when people pass their Ph.D, but not all universities have that.

Thanks for sharing Monique!

This article was posted on Sunday, February 3rd, 2013 at 10:31 am and is filed under Countries & Cultures, France, Graduations, Holidays Around the World, USA. You can follow any responses to this entry through the RSS 2.0 feed. You can skip to the end and leave a response. Pinging is currently not allowed.