A place for poems, songs, rhymes, and traditions from around the world for both kids and grown-ups to enjoy!
Advertisement
Girls Used to Learn to Embroider in France in the 1960’s
February 18th, 2016 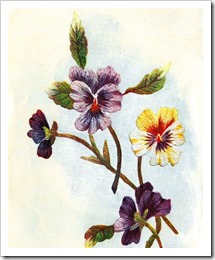 "When I was in my early teens, in the Summer, in the afternoon, everybody was required to be quiet to allow the men to get some rest. It didn’t appear in any regulation, but it was implied in all the villages. Men used to leave at daybreak to work in the vineyards before it was too hot and they rested in the afternoon.  But it wasn’t implied in their minds that they should be quiet at 4am to allow the children, the women and the old people to sleep! What was good for the goose wasn’t good for the gander!

The women and girls would take a chair out in the shade in the street (which was sometimes cooled off with a hose beforehand).  There they would darn, knit or embroider. We girls would learn how to do what you call the outline stitch (in French – point de tige), chain stitch (point de chainette), buttonhole stitch (point de festoon), briar stitch (point d’Ã©pine), knot stitch (point de nÅud) etc. Girls in the early 60’s were supposed to embroider bed sheets, dish towels and the like with at least their initials for their trousseau.

Maybe it’s still the case in some rural areas in some countries."

Do girls in your country still learn to embroider? Let us know about your experiences in the comments below.

This article was posted on Thursday, February 18th, 2016 at 4:27 pm and is filed under Arts and Crafts, Countries & Cultures, Customs and Traditions, Embroidery, France, Knitting, Trousseau, Wedding Traditions. You can follow any responses to this entry through the RSS 2.0 feed. You can skip to the end and leave a response. Pinging is currently not allowed.