A place for poems, songs, rhymes, and traditions from around the world for both kids and grown-ups to enjoy!
Advertisement
German Pedestrian Crossing Lights
September 16th, 2013 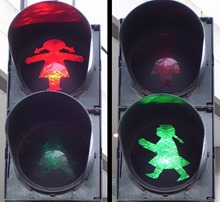 I went to Berlin for the first time this Summer and discovered special crossing signs for pedestrians at traffic lights.  These crossing lights are originally from former East Germany.

"walk". The red ones with a rounded hat means "stop".  The female lights are called "Ampelfrauen" (a single one is "Ampelfrau").  The female ones are braided-haired women. You can also see some with an umbrella but I didn’t notice any -there are so many things to see that you can’t be aware of everything!

When the Berlin Wall fell in 1989, things tended to be standardized, pedestrians signs included. But some people didn’t want those special little characters to disappear and they were able to save them.  So now, besides seeing them at traffic lights you can find them printed on a lot of items in AmpelmÃ¤nnchen stores.  They can be found on mugs, key-rings, cooking aprons, t-shirts, candy boxes, etc.  You can even find statues of them on sidewalks.  If you come across one when you’re tired from walking around the city, you can rest your arms on their hat and take a break. 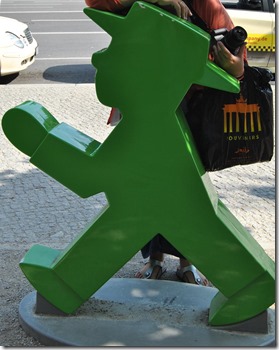 Monique Palomares is from France and works with me on the French and Spanish versions of Mama Lisa’s World.

The photo of the Amperfrau is from Wikipedia.

This article was posted on Monday, September 16th, 2013 at 10:32 am and is filed under Countries & Cultures, German, Germany, Languages, Traveling. You can follow any responses to this entry through the RSS 2.0 feed. You can leave a response, or trackback from your own site.