A place for poems, songs, rhymes, and traditions from around the world for both kids and grown-ups to enjoy!
Advertisement
Genres of Japanese Children’s Music
March 15th, 2016 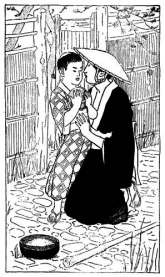 There are three genres of childrenâs songs nowadays:

2. Shoka (å±æ­ or æé¨çå±æ­) – Songs authorized by the Ministry of Education after the Meiji Restoration in 1868. These are often set to western-style tunes.

âããã¹ãã warabe utaâ is just a proper translation of ânursery rhymeâ. They’re similar to old English nursery rhymes. Games are often played with them. Some of the words are often incomprehensible to modern children.

There are many warabe uta on the Mama Lisa’s World Japanese Song Pages:

All warabe uta were transmitted orally in the old times. After the Meiji Restoration, many excellent Japanese musicians expressed the tunes with notes on five lined sheet music. Almost all of warabe uta have tunes now.  So warabe uta aren’t just recited nowadays. They’re sung and played on musical instruments.

Shoka (å±æ­) were created in the 1870’s after Japan opened up to the West and when it was creating its school system. They were created to introduce western music and singing in the schools. In the old days, the Ministry of Education published musical textbooks for each elementary school year from first to sixth grades.

Nowadays, the Ministry of Education, Culture, Sport, Science and Technology has to officially approve of textbooks before they’re published for elementary school, junior high and high-school. In the textbooks, there are many genres of songs, such as warabe-uta, doyo, and foreign childrenâs songs. So recently we say "shoka" is the same as childrenâs songs. The word âshokaâ is used in school only. For example âNext class will be shoka.â

ç«¥è¬¡ (Doyo) can translate as âchildren’s songâ and also "nursery rhyme". ç«¥è¬¡ (Doyo) is an old Chinese pronunciation, it’s not originally a Japanese word. These come from an old tradition and were handed down through the generations.

Many thanks to Sadao Mazuka for sharing this information with us!

This article was posted on Tuesday, March 15th, 2016 at 6:26 pm and is filed under Children's Songs, Countries & Cultures, Japan, Japanese, Japanese Kids Songs, Languages. You can follow any responses to this entry through the RSS 2.0 feed. You can skip to the end and leave a response. Pinging is currently not allowed.