A place for poems, songs, rhymes, and traditions from around the world for both kids and grown-ups to enjoy!
Advertisement
French Canadian Tradition: La fÃªte des rois
January 5th, 2021

Therese Siemers wrote from Alberta, Canada about howÂ La fÃªte des rois and Christmas has been celebrated there…

“French Canadian tradition: La fÃªte des roisÂ -The feast of the kings in celebrated on January 6th.Â  Ukrainian Christmas is also celebrated here in this area of Alberta, Canada.

As children, we always celebrated Christmas Eve with âle rÃ©veillonâ. After midnight mass, people would have a family celebration with meat pie âtourtiÃ¨reâ & potato pie, and other treats. Children might even be allowed a small sip of homemade wine. You might be up until 2 or 3 a.m. 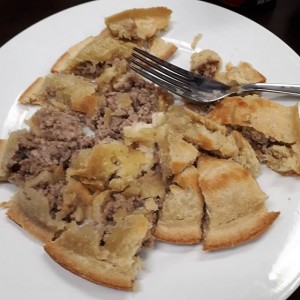 On January 6, we celebrated âla fÃªte des roisâ. It was very exciting. A plain white cake â un gÃ¢teau blanc â a flat white cake was baked. (SeeÂ Recipe forÂ gÃ¢teau blanc.) We wrapped in wax paper a dime & a nickel and sometimes a penny. These were baked in the cake. Whoever got the dime was king, the nickel was queen, and if there was a penny, it was no big deal. Whoever was king could tell others what to do for the day. You had to do what you were asked to do. It was all in fun, but it was very exciting for children. You picked fun things to do. Some people would put a bean and a pea instead.

I asked Therese if they still celebrate La fete des rois. She wrote…

“Possibly in areas where there are more francophones. My husband is not French, so we donât celebrate the old traditions.Â The custom of opening Christmas gifts on New Year’s Day is no longer observed.

I called lâACFA – the Alberta organization of Francophones. The gentleman I spoke to – he has a real Quebec accent – advises that the local Council has in the past few years, even as recently as 2014 or 2015 had activities between family groups celebrating âLa fÃªte des rois.â Although with Covid this year, no activities are happening. So individual families may possibly have their own celebrations in their homes if there are children. Thatâs the local ACFA office. It is throughout Alberta.

Here, in Alberta, there is a very substantial Ukrainian population, and for sure they celebrate January 6, Ukrainian Christmas. They have at least 6 dishes that must be served and of course, you can buy Ukrainian cabbage rolls, perogies, and sauerkraut in grocery stores. Besides those staples, Ukrainians have a wheat dish, the cornmeal dish, and those little round dough balls baked and served warm with cream called pereske, and the fruit filled deep fried buns Pampushky, and the little Nalysnyky – little crepes filled with cottage cheese. And then they also have a special Christmas bread. Ladies make most of those delicacies and you can buy them at Farmersâ Markets all over Alberta.

I leave my Christmas tree up every year until January 7 – after the feast of the Kings. And probably most Ukrainian families would also do so.”

Many thanks to Therese for sharing these traditions with us! If anyone from Canada would like to shareÂ how they celebrate La fete des rois, please comment below.

This article was posted on Tuesday, January 5th, 2021 at 4:34 pm and is filed under Canada, Christmas, Christmas Eve Traditions, Countries & Cultures, Holidays Around the World, La fÃªte des rois or Kings Day, Mama Lisa. You can follow any responses to this entry through the RSS 2.0 feed. You can skip to the end and leave a response. Pinging is currently not allowed.