A place for poems, songs, rhymes, and traditions from around the world for both kids and grown-ups to enjoy!
Advertisement
For All of You Star Wars Fans: Tataouine is a Real Place in Tunisia
April 19th, 2007

If you’re a Star Wars fan you know that Luke Skywalker grows up on the planet Tatooine. But what you may not know is that Tatooine is a real town in Tunisia! (Spelled “Tataouine”.)

The connection between Tatooine and Tunisia goes deeper than the just the name. Many of the scenes in Star Wars Episode IV (the first movie) that took place on Tatooine were filmed in the North Aftrican nation â though not in the town of Tataouine.

In the movie, the farm where Luke grew up looks like it’s a single area. But it was actually filmed in more than one place. The scenes with the sunken home, pictured below, were filmed in the town of Matmata. There, homes really were built underground ages ago. This view of Luke’s house is actually a hotel, called Hotel Sidi Driss.

Other views of the outside of Luke’s home were filmed in the town of Nefta. (Pictured below). 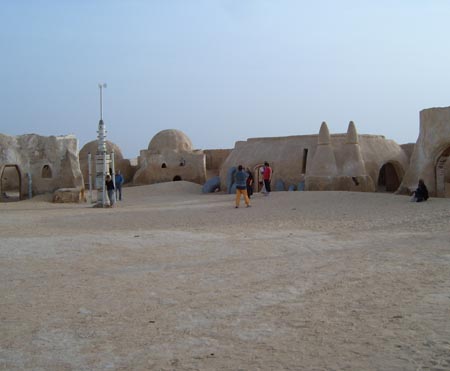 Still other scenes of Tatooine were filmed in Tozeur.

The way people in Tunisia dress also influenced Lucas in his designs for Jedi costumes.

Many thanks to Monique Palomares of Mama Lisa’s World en franÃ§ais for the photo outside Luke’s home, and to Andy Carvin for the photo of Hotel Sidi Driss. The initial map is courtesy of the CIA World Factbook. I altered it to show the Star Wars locations mentioned.

This article was posted on Thursday, April 19th, 2007 at 4:04 pm and is filed under Countries & Cultures, Movies, TV & The Internet, Star Wars, Tataouine, Tunisia. You can follow any responses to this entry through the RSS 2.0 feed. You can skip to the end and leave a response. Pinging is currently not allowed.

3 Responses to “For All of You Star Wars Fans: Tataouine is a Real Place in Tunisia”