A place for poems, songs, rhymes, and traditions from around the world for both kids and grown-ups to enjoy!
Advertisement
Counting-out Rhymes and a Gypsy Magic Spell
April 12th, 2012 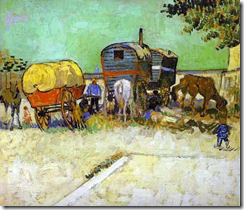 Iâve recently been asked about a counting-out rhyme chanted in Indiana.  This rhyme may have its origins in an old Gypsy magic spell.

Marsha wrote to me about the rhyme that was chanted by her grandmother:

âI’ve been trying to find the source of a chant my grandmother taught me.  My mother (who is 86) has some memory of it but doesn’t know where it came from.  My grandmother came from southern Indiana and had mostly English ancestry.  Since I’ve never seen it written, I can only write it as I remember hearing it.  Can you help me?  I can not find anyone who has heard this.â
Eenie, rorie, rickry Ann
Filosy, falosy, Nicholas, John.
Kreevy, kravy, English Navy
Stinklum, stanklum, buck.

There are many variations of this rhyme that can be found from long ago.  Harry Bolton wrote in his book, âThe Counting-out Rhymes of Childrenâ (1888), that these rhymes had their origins in a magical spell in a Romany language of the gypsies:

We have referred to a single case in which a current doggerel has been traced to its sourceâa magical spell; the following rhyme, notable for its senseless combination of uncouth words and jingling rhythm, is well known to most adults and many children in the United States, especially in New England.

On the authority of Mr. Charles G. Leland, author of several works on the gypsies and their language, the above rhyme differs little from a Romany stanza, which is virtually a gypsy magic spell. The Romany is as follows :â

This is chiefly nonsense, but can be translated in part:â

Hereâs another that I think comes even closer to the sound in Marshaâs rhyme:

Whether or not these rhymes really come from an old gypsy spell seems dubiousâ¦  Either way, theyâve been used by children as counting-out rhymes in many, many variations over the past couple of centuries.  That makes them intriguing enough in their own right!

This article was posted on Thursday, April 12th, 2012 at 8:57 am and is filed under Counting-out Rhymes, Counting-out Rhymes, Countries & Cultures, Folk Lore, Gypsy Magic Spells, Languages, Nursery Rhymes, Rhymes by Theme, Romani, Romany, USA. You can follow any responses to this entry through the RSS 2.0 feed. You can skip to the end and leave a response. Pinging is currently not allowed.

9 Responses to “Counting-out Rhymes and a Gypsy Magic Spell”