A place for poems, songs, rhymes, and traditions from around the world for both kids and grown-ups to enjoy!
Advertisement
Basho’s Haiku about the Moon with Recordings
February 14th, 2015 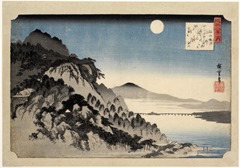 Matsuo BashÅ (1644 â 1694) was the master of Haiku! Here you can listen to some of his haiku about the moon in Japanese and English. You can read along with the Japanese text, the pronunciation, the English translations and commentary….

MP3 of Basho’s Haiku about the Moon

Oh! the moon gazing where some clouds From time to time repose the eye!

[Even beauty is best appreciated when occasionally veiled.]

In the bright moonlight what appeared Like flowers is a cotton field.

[What he took for a grove of lovely cherry-blossom is but a common cotton plantation after all. Unpoetical at the fact is, he states it because it is a fact.]

Oh! clouds about the moon, from whence She falters forth so debonair!

Despite that I have nine times risen, ‘Tis but the fourth hour by the moon.

[In Japanese, the "seventh" hour, their seven o’clock (old style) corresponding to our 4 a.m. The poet has risen repeatedly to gaze at the beauteous moon, but still the dawn comes not.]

The English Translations and Text: B.H. Chamberlain Print of the Moon: Utagawa Hiroshige (1797-1858) Recording by: Ekzemplaro & Rob Board

This article was posted on Saturday, February 14th, 2015 at 9:21 pm and is filed under Basho, Countries & Cultures, Haiku, Japan, Japanese, Japanese Poems, Languages, MP3's, MP3's of Poems, Poetry, Poets, Recordings, Recordings of Poems. You can follow any responses to this entry through the RSS 2.0 feed. You can skip to the end and leave a response. Pinging is currently not allowed.

2 Responses to “Basho’s Haiku about the Moon with Recordings”