A place for poems, songs, rhymes, and traditions from around the world for both kids and grown-ups to enjoy!
Advertisement
Barmbrack – Irish Bread for Halloween
July 20th, 2012 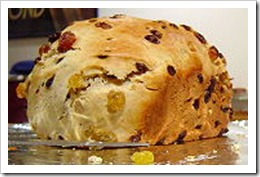 Barmbrack is an Irish fruit bread that’s served for Halloween and for Samhain, a similar holiday celebrated on November 1st.

Barmbrack has traditionally been cooked with objects inside that are used for âfortune-tellingâ.  Below are some objects used.  Whoever receives the slice with that object is supposed to have the corresponding fortune in the upcoming year:

A Toy Coin: That person will get rich. A Piece of Fabric or a Bean:  Poverty A Matchstick:  An unhappy marriage with fighting. Gold Ring: Marriage A Button: Bachelorhood A Thimble: Spinsterhood A Pea: That person will not get married in the upcoming year.

Nowadays, barmbrack is sold in stores with only a toy ring baked inside. The person who gets the ring is supposed to be the one who will get married.

Barmbrack comes from the Gaelic term for the bread which is âbairÃ­n breacâ.  This translates to speckled bread.  Itâs speckled because thereâs dried fruit in it.

Thereâs an Irish Gaelic song with Barmbrack mentioned in it called OÃ­che Shamhna (Halloween).  Itâs sung to the tune of FrÃ¨re Jacques.

This article was posted on Friday, July 20th, 2012 at 3:47 pm and is filed under Bad Luck, Barmbrack, Bread, Charms, Countries & Cultures, Cuisine, Customs and Traditions, Gaelic, Good Luck, Halloween, Holidays Around the World, Ireland, Irish Cuisine, Languages, Recipes of the World, Samhain, Superstitions, Symbolic Food, Symbols. You can follow any responses to this entry through the RSS 2.0 feed. You can leave a response, or trackback from your own site.

One Response to “Barmbrack – Irish Bread for Halloween”