A place for poems, songs, rhymes, and traditions from around the world for both kids and grown-ups to enjoy!
Advertisement
Bastille Day in France
November 25th, 2019 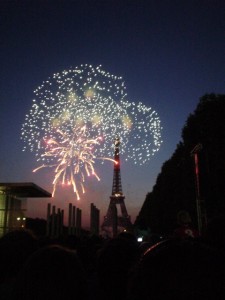 Bastille Day takes place on July 14th in France.Â It’s known as “le 14 juillet” (the 14th of July) in French. It commemorates the storming of the Bastille on July 14, 1789, and the celebration of the Federation and the union of the nation exactly one year later in 1790. A law was passed on July 6, 1880 making it the official national holiday.

The Bastille was a fortress, originally an arsenal and a fort, that was built between 1356 and 1358. It later served as a prison. The prisoners were essentially prisoners of the state. For example, Henry IV imprisoned the Duke of Biron who betrayed him and who was later the subject of a song called (Quand Biron voulut danser – When Biron Wanted to Dance).

Richelieu, the minister of King Louis XIII (son of King Henry IV) made it a federal prison where people were sent by a “lettre de cachet” or royal missive. A lettre de cachet was a letter signed by the king or by a minister which permitted them to exile or execute someone (without a trial), especially someone who challenged the power of the royalty. The Bastille was thus the symbol of the arbitrariness of the king, even though in 1789, it was just an ordinary prison.

On July 14th, 1789, the price of bread had reached new heights (bread was the mainstay of food for the people). Parisians were exasperated and that morning, they seized rifles and cannons from the Hotel des Invalides, where disabled soldiers were sent after wars. Then they attacked the Bastille. It was finally taken at night, at 5pm. The prisoners (just 7!) were set free. The demolition of the fortress started the next day. 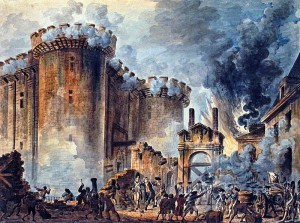 For the first anniversary, in 1790, a celebration of the Federation was organized at the Champ de Mars, at the end of which you’ll find the Eiffel Tower nowadays. King Louis XVI swore an oath to the Nation and its laws in the presence of the deputies (akin to representatives in Congress of the US).

Since France had many changes of government after the Revolution (royalty, republic, empire…), it wasn’t until 1880 that July 14th officially became the date of the holiday celebrating France.

Military parades are organized for the holiday. In Paris, they take place at the Champs ÃlysÃ©es. After the French Acrobatic Patrol flies by, the President of the Republic reviews the various army corps. The parade is shown on TV. Military parades take place in all of the big cities in the country.

In many places, there are fireworks at night, even though it’s expensive and it’s money that goes up in smoke, but people love fireworks. In addition, it helps support the pyrotechnic companies! Sometimes there are also fireworks on the 13th.

Sometimes, we also organize a meal to celebrate the Republic. It’s organized outdoors in a public place. In general, there’s a speech at the end of which we sing La Marseillaise.

The one I often attend is a normal French meal = starter, main course, cheese & dessert. The starter course is often half a melon au porto, which is a small melon with port wine in the hole inside the melon. The main course is a full dish like paella or a piece of chicken with vegetables. The cheese is often a portion of pre-packaged Camembert or Roquefort. Dessert is a piece of apple pie or an ice-cream bar.

Popular dances are also organized throughout the country (including those organized by firefighters), often on the evening of the 13th since the morning of the 15th we return to work.

Note that the name Bastille Day or “le jour de la Bastille” is totally unknown in France. We call it “FÃªte Nationale” (National Day) or “14 juillet” (July 14th) and we do not wish people a “Happy National Day” like we would say “Happy New Year”!

You can read this Article in French.

Photo of the storming of the Bastille: By Jean-Pierre HouÃ«l â BibliothÃ¨que nationale de France (1789).

This article was posted on Monday, November 25th, 2019 at 9:25 pm and is filed under Bastille Day, Countries & Cultures, France, French, Holidays Around the World, Languages, Mama Lisa. You can follow any responses to this entry through the RSS 2.0 feed. You can skip to the end and leave a response. Pinging is currently not allowed.