A place for poems, songs, rhymes, and traditions from around the world for both kids and grown-ups to enjoy!
Advertisement
Non Alcoholic Cheese Fondue – A Holiday Day Treat for your Kids
February 12th, 2006 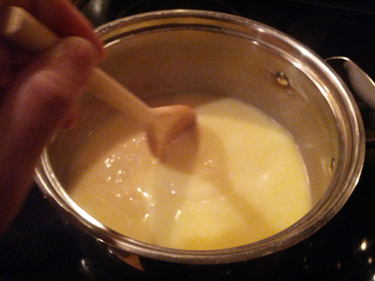 My kids love this cheese fondue recipe. It’s nice to make this for Valentine’s Day dinner, to make it a special meal for them. Here’s the recipe for Non-Alcoholic Cheese Fondue…

*You can mix Swiss and Gruyere for a stronger taste. Some people prefer Cheddar.

Dippers – Italian or French Bread cut into about 1 Â¼ to 1 Â½ inch pieces is a must! We also like thin sausage cut into bite sized pieces. If you’d like you can serve slices of apple on the side.

Peel garlic and slice the cloves in half the long way so the most inner surface is showing. Rub a heavy saucepan with two halves of the garlic for flavoring. Rub the fondue pot with the other two garlic halves.

Grate the cheese and mix with 1 T. of the flour.

Melt the butter in saucepan over medium-low heat. Add rest of flour. Stir well till smooth. Add about Â½ cup of milk and stir till smooth. Slowly add the rest of the milk, stirring constantly until the mixture thickens to about the consistency of light cream. Add a handful of cheese and keep stirring. Let the cheese melt and then add another handful and stir until it melts. Repeat the process until all the cheese is melted.

Light the sterno and add cheese mixture to the fondue pot. Eat immediately! Spear bread and dunk in fondue and enjoy. Scrape the bottom of the pot with whatever you’re dipping from time to time to keep it from burning.

This article was posted on Sunday, February 12th, 2006 at 8:41 pm and is filed under Cheese Fondue, Main Course, Non Alcoholic Fondue, Recipes of the World. You can follow any responses to this entry through the RSS 2.0 feed. You can skip to the end and leave a response. Pinging is currently not allowed.