A place for poems, songs, rhymes, and traditions from around the world for both kids and grown-ups to enjoy!
Advertisement
A Nursery Rhyme Story and Illustration
May 20th, 2009

Young nursery rhyme lovers will enjoy this little story featuring Mother Goose characters.  Kids who aren’t familiar with a lot of nursery rhymes can learn new ones.  I made each character linkable to a page where you can read that character’s rhyme.  At the end of the story is an illustration that includes many of these beloved nursery rhyme characters. 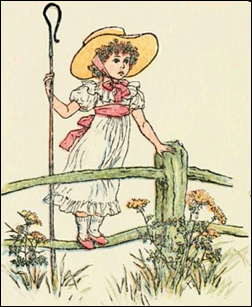 It was May-day, and the sun popped out of bed early that morning to wake up the little birds and flowers, that they might clear their throats, and wash their bright faces in dew, by the time the old woman had swept the cobwebs from the sky, and left a beautiful blue roof over Gooseneck village; for they knew it was the 1st of May, and that dear old Mother Goose, who taught the Kindergarten, or infant school, was going with all her little scholars to have a May party under the trees in the merry green wood.

And the children knew it too, and they were all on hand bright and early- Tommy Green and Johnny Stout, Humpty Dumpty and Little Bo-peep, Jack and Jill, Little Boy Blue in a brand-new suit of clothes, and Goldilocks with her yellow hair flying in the wind, Tom, the Piper’s son, and poor Simple Simon, the dunce of the school, with many others that we have known and loved-and all brought baskets filled with good things for their dinner.

"Oh, won’t we have fun!" said Margery Daw to Jacky Horner. "I hope you have got something nice in that big basket of yours."

"Yes, indeed," said Jack. "Cook made me a lovely pie, and stuffed it just full of plums. I will try and pull one out for you;" and he lifted up the napkin over the basket, and was trying to break a hole in the pie-crust, when Mother Goose came in, and seeing him, said, "Here, here, Master Jack! keep your fingers out of the pie. I never saw such a boy. He sticks his thumb into everything, from Christmas pies to inkstands."

"Oh, Mother Goose, do let us start!" shouted the children.

"Yes, yes, my dears, very soon. We are only waiting for Contrary Mary. I have sent Nimble Dick for her; and here they come now."

Sure enough, there was heard a jingling of bells, and in danced Mary, quite contrary, with her fingers covered with rings, and her apron filled with flowers from her garden, with which to make a wreath for the May-Queen.

And now they all started, walking two and two, with Mother Goose at the head, holding the youngest scholar, Baby Bunting, tight by the hand, for fear he should fall down and tear his new rabbit-skin overcoat, while Tom, the Piper’s son, played "Over the hills and far away" on his pipe, and all the little folks danced and skipped along to the gay tune.

When they reached the pleasant wood, they were all glad to sit down on the green moss and rest awhile; and Mother Goose said, "The first thing is to choose a May-Queen: now who shall it be?"

"Goldilocks!" "Goldilocks!" shouted the children, for they all loved the dear little girl with pretty hair and sweet blue eyes.

"Oh, no, no!" said Goldilocks, and she hid behind Tommy Tucker.

But they made her come out and sit on a throne formed of Miss Muffet’s tuffet, scattered over with wild violets and May-flowers, which grew all around; and Contrary Mary put a beautiful crown of "roses and lilies and daffadown-dillies" on her golden curls, and she looked just the dearest little May-Queen in all the world.

Then all the children joined hands, and danced round the throne, singing,

"Hail to the Queen of May
On this our festal day!
Gay flowers we’ll bring,
Sweet blossoms of spring,
To crown our Queen of May."

The little Queen then gave each one a flower, and let them kneel and kiss her tiny white hand; and then they scattered through the woods, and played "Oats, peas, beans," tag, and other games, until Little Boy Blue blew a blast on his horn, which meant "Come to dinner"; and when they all came running back at the call, they found Mother Goose had a table-cloth spread on the grass, and all the biscuits, cake, and fruit from their baskets set out on green leaves, while in the centre stood Jack Horner’s pie, a bowl of curds and whey that Miss Muffet brought, and a plate of strawberry tarts sent by the Queen of Hearts; and Jack and Jill were bringing a pail of nice cold water from the spring.

How hungry they all were, too, and how good everything tasted! while they had such a laugh at little Miss Muffet, who screamed and ran away when a great daddy-long-legs walked across the table.

They ended the feast with the plum pie, which the little Queen cut, and gave every one a piece; and they all said it was so nice. Jack Horner felt quite proud, and thought he was a bigger boy than ever.

After everything was eaten up, Margery Daw and Little Bo-peep washed the dishes, while Little Boy Blue went fast asleep under the fence, and Mother Goose told all the little ones a story, until the cobwebs began to come over the sky, and the sun whispered to the little birds and flowers it was time to shut their peepers for the night, when they started for home, Goldilocks the Queen riding in the middle of the procession on big John Stout’s shoulder; and when they bade their teacher a tired but happy good-night, all said they had had the nicest kind of a day, and hoped next year Mother Goose would give them another May party. 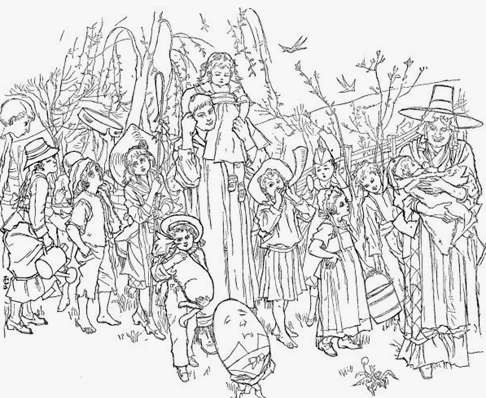 GOING HOME FROM THE PICNIC.-Drawn by Jessie Curtis.

This article was posted on Wednesday, May 20th, 2009 at 10:20 am and is filed under Arts and Crafts, Childrens Stories, Countries & Cultures, English, English Nursery Rhymes, Holidays Around the World, Illustrations, Languages, May Day, Mother Goose, Mother Goose Story, Nursery Rhymes, United Kingdom, USA. You can follow any responses to this entry through the RSS 2.0 feed. You can skip to the end and leave a response. Pinging is currently not allowed.

2 Responses to “A Nursery Rhyme Story and Illustration”