A place for poems, songs, rhymes, and traditions from around the world for both kids and grown-ups to enjoy!
Advertisement
A Poem – The Butterfly’s Ball and the Grasshopper’s Feast
January 12th, 2008

The Butterfly’s Ball and the Grasshopper’s Feast was first published in 1807. It was written by William Roscoe, a member of the British parliament who fought against the slave trade. Roscoe wrote the poem for his children. The Character “Robert” in the poem was one of his youngest sons and this poem was written in honor of his birthday. It was originally set to music.

Though the language of the poem is a little old-fashioned, I found it to be charming when viewed in combination with the illustrations.

Of course the world of the Butterfly’s Ball is filled with all sorts of creatures. Here’s a refresher of a couple you might not be familiar with… A gadfly is a type of fly that annoys animals by stinging them. An emmet is a social insect resembling an ant, but the males and the queen have wings. They live in colonies. A dormouse was an animal that lived in the Old World. It was between a squirrel and a mouse in character and form.

Enough with the introductions, here’s the poem… 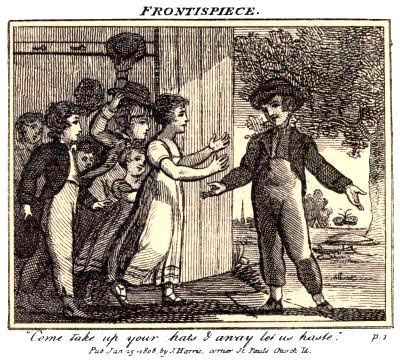 Come take up your Hats, and away let us haste
To the Butterfly’s Ball, and the Grasshopper’s Feast.
The Trumpeter, Gad-fly, has summon’d the Crew,
And the Revels are now only waiting for you.

So said little Robert, and pacing along,
His merry Companions came forth in a Throng.
And on the smooth Grass, by the side of a Wood,
Beneath a broad Oak that for Ages had stood, 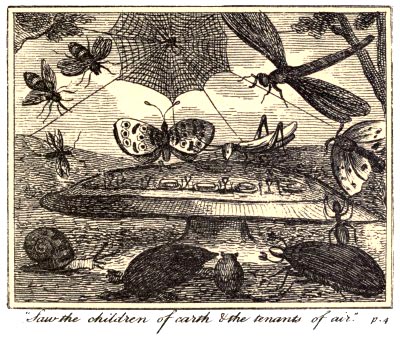 Saw the Children of Earth, and the Tenants of Air,
For an Evening’s Amusement together repair.
And there came the Beetle, so blind and so black,
Who carried the Emmet, his Friend, on his Back.

And there was the Gnat and the Dragon-fly too,
With all their Relations, Green, Orange, and Blue.
And there came the Moth, with his Plumage of Down,
And the Hornet in Jacket of Yellow and Brown;

Who with him the Wasp, his Companion, did bring,
But they promis’d, that Evening, to lay by their Sting.
And the sly little Dormouse crept out of his Hole,
And brought to the Feast his blind Brother, the Mole. 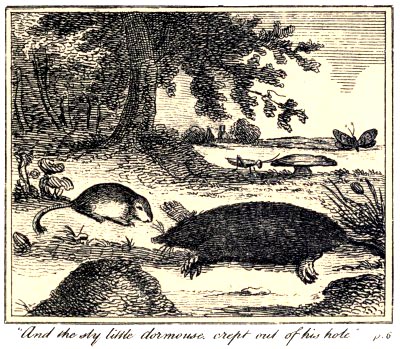 And the Snail, with his Horns peeping out of his Shell,
Came from a great Distance, the Length of an Ell.
A Mushroom their Table, and on it was laid
A Water-dock Leaf, which a Table-cloth made. 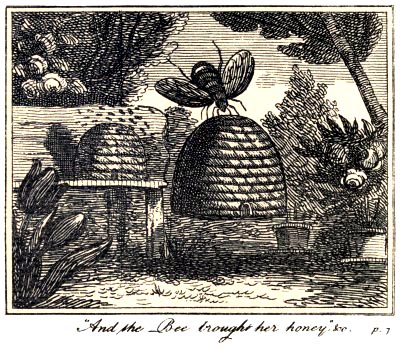 The Viands were various, to each of their Taste,
And the Bee brought her Honey to crown the Repast.
Then close on his Haunches, so solemn and wise,
The Frog from a Corner, look’d up to the Skies.

And the Squirrel well pleas’d such Diversions to see,
Mounted high over Head, and look’d down from a Tree.
Then out came the Spider, with Finger so fine,
To shew his Dexterity on the tight Line.

From one Branch to another, his Cobwebs he slung,
Then quick as an Arrow he darted along,
But just in the Middle,-Oh! shocking to tell,
From his Rope, in an Instant, poor Harlequin fell. 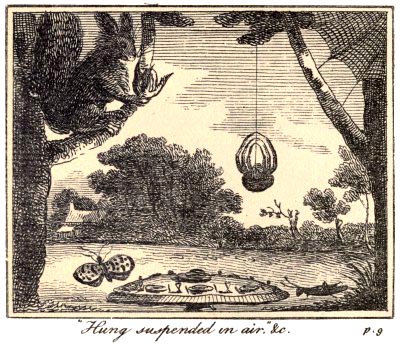 Yet he touch’d not the Ground, but with Talons outspread,
Hung suspended in Air, at the End of a Thread.
Then the Grasshopper came with a Jerk and a Spring,
Very long was his Leg, though but short was his Wing;

He took but three Leaps, and was soon out of Sight,
Then chirp’d his own Praises the rest of the Night.
With Step so majestic the Snail did advance,
And promis’d the Gazers a Minuet to dance. 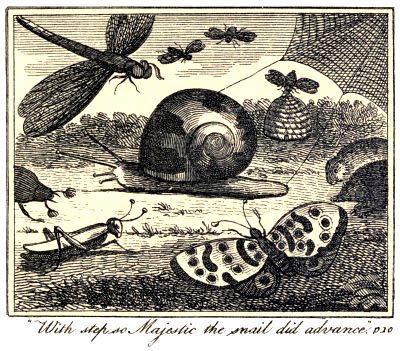 But they all laugh’d so loud that he pull’d in his Head,
And went in his own little Chamber to Bed.
Then, as Evening gave Way to the Shadows of Night,
Their Watchman, the Glow-worm, came out with a Light. 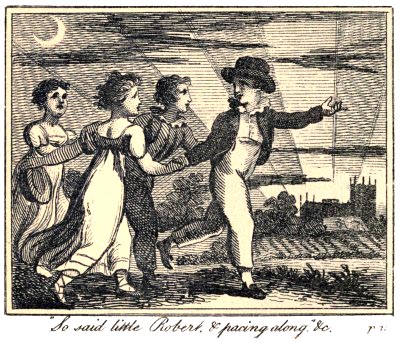 Then Home let us hasten, while yet we can see,
For no Watchman is waiting for you and for me,
So said little Robert, and pacing along,
His merry Companions returned in a Throng.

END OF THE BUTTERFLY’S BALL.

This article was posted on Saturday, January 12th, 2008 at 6:30 pm and is filed under Australia, Countries & Cultures, England, English, Languages, Poems, Poetry, Poets, The Butterfly's Ball and the Grasshopper's Feast, United Kingdom, USA, William Roscoe. You can follow any responses to this entry through the RSS 2.0 feed. You can leave a response, or trackback from your own site.