A place for poems, songs, rhymes, and traditions from around the world for both kids and grown-ups to enjoy!
Advertisement
A Ladino’s Children’s Song with a Recording
August 30th, 2016 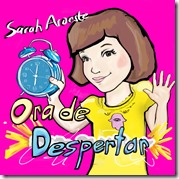 Singer and Songwriter Sarah Aroeste has shared with us one of her lively Ladino children’s songs.

Ladino is a Judeo-Spanish dialect that was originated by Spanish Jews after their expulsion from Spain in 1492.  Those who left Spain, including Aroesteâs family, carried the medieval language with them to the various points where they later settled, primarily along the Mediterranean coast and North Africa. In time, Ladino came to absorb bits and pieces of languages all along the Mediterranean coast, including some Greek, Turkish, Portuguese, French, Italian, Hebrew, and more. Nowadays the largest population of Ladino speakers live in Israel. It’s a minority language there, as well as in Turkey, France and Bosnia and Herzegovina.

Here’s a short version of one of Sarah’s Ladino kids songs that can be found on her album. It’s called âOra de Despertar" (Time to Wake Up).  It’s a very easy song for adults and kids all about waking up in the morning.  Below are both the Ladino and English lyrics with a lovely a cappella recording by Sarah…

Time to Wake Up (English Translation)

The sun shines through my window
The shadows dance along
The birds all play outside
As they sing their song.

Check out Sarah Aroeste’s site to hear a longer version of this song and to discover more of her Ladino music.

Many thanks to Sarah for sharing her song with us! You can also learn a traditional Ladino song here that Sarah shared with us.

This article was posted on Tuesday, August 30th, 2016 at 6:40 pm and is filed under Children's Songs, Countries & Cultures, Israel, Ladino, Languages, Spain, Spanish, Turkey. You can follow any responses to this entry through the RSS 2.0 feed. You can skip to the end and leave a response. Pinging is currently not allowed.