"Little Drops of Water" can be found in some English nursery rhyme collections. It originally comes from a poem called "Little Things" by Julia A. F. Carney. You can read the full poem and read more about the authorship in the song Notes below the nursery rhyme version. 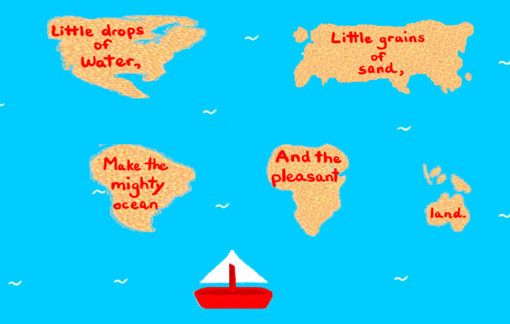 It turns out that this nursery rhyme comes from the poem below. The earliest place we've been able to find it in print thus far is in "Songs and Stories for Mother's Darling" (1854). No author is attributed.

Little drops of water
Little grains of sand,
Make the mighty ocean,
And the beauteous land.

And the little moments,
Humble though they be,
Make the mighty ages
Of eternity.

So our little errors
Lead the soul away
From the path of virtue,
Oft in sin to stray.

Little deeds of kindness,
Little words of love,
Make our earth an Eden
Like the heaven above.

"The Standard Third Reader for Public and Private Schools" (1859) refers to the author as anonymous.

Some early versions have this extra verse which is attributed to "Juvenile Missionary Magazine":

It's not until 1879 in "The Children's Book of Poetry" that we find an attribution. They list the author as Ebenezer Cobham Brewer but it seems he didn't know the author when asked. Though he may have written the verse above though with a slight difference:

In "The Children's Hour: Old fashioned stories and poems" (1907) we find the poem attributed to Julia A. F. Carney. Wikipedia also states that she's the author of least the 1st verse of the poem:

"In 1845, when studying phonography in Stephen P. Andrews' and Augustus F. Boyle's class, Boston, she was asked to give an impromptu exercise on the blackboard. Only ten minutes were allowed, and in that time, she wrote the first verse of "Little Things". It became a favorite of children in Sunday school exhibitions from that time on, and was recited and sung thousands of times. It was first published in the Sunday-school paper, later called the 'Myrtle'."

Soon after her little phonographic poem was published, it appeared in the Methodist 'Sunday-School Advocate,' with an additional verse about missionary pennies, to which she laid no claim."

Here's a parody by Gelett Burgess from his book "The Goops and How to Be Them":

This mp3 is of one of the longer versions...

Recited by Kaylee Kay for Librivox.

Here's a fun animation we created for this rhyme.
(Scroll down for the lyrics.)
This movie requires Flash Player 8. Download it here.

Many thanks to Heidi Detty and Kath Mitchell for helping us track down the authorship of "Little Things".